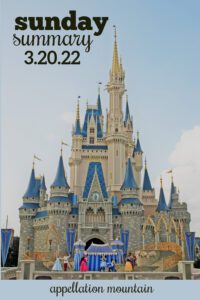 Around the time you read this, I should be eating a Mickey-shaped pretzel and soaking up all the magic.

Yup, it’s time for another Disney trip. Here’s hoping the #namespotting will be as marvelous as it usually is. Cast member nametags! Families in personalized tee shirts! And all those ears with names on the back.

Plus, of course, the names that inhabit the worlds that make up the magic – from Arendelle to Batuu, Neverland to Pandora.

If you, too, are among the millions of people spending spring break in the parks, I’ll be the one discreetly (I hope) jotting down names in her Notes app.

Swistle reminds us that we tend to assume children will take their dads’ surnames. Because we don’t perceive that as a choice, we don’t give moms more control over choosing first names. (Or middles.) But if we thought of the last name as deliberately chosen, wouldn’t that shift the balance? He picked the last name, so she picks the first? Of course, I think compromise is the best approach … but it’s food for thought. (And here are my thoughts on the many options to ponder before choosing a surname.)

I haven’t watched – or read – The Pursuit of Love yet … but I’m intrigued to hear that a character is called Lavender. While I’m binging all things Amazon Prime, I also noted a new character named Dinah on the fourth season of The Marvelous Mrs. Maisel, and I am so here for it. Television is an engine that drives name discovery, even in our splintered world of streaming.

The Irish Top Ten ranges from Tadhg and Fiadh to Lily and Jack. It’s always interesting to see how close it is to American favorites … and how far away, too!

Can’t get enough name talk? Subscribe for the weekly newsletter, sent every Tuesday:

That’s all for now. As always, thinking of you! 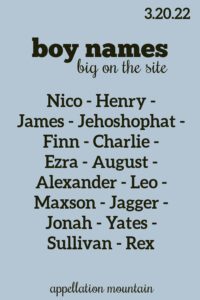 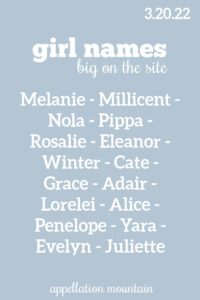