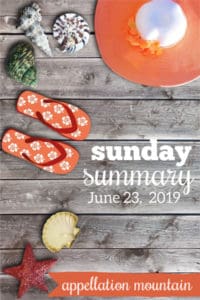 Sometimes pop culture suggests an outlandish name, and I quietly root for it to catch on.

Stranger Things‘ Eleven, for one. Yes, it’s bananas. But it’s also an intriguing word name, sharing sounds with the traditional Evelyn. And something about Eleven seems symbolically appealing, too – though maybe best left for the middle spot. If at all. Eight girls were given the name in 2018, plus seven in 2017, up from pretty much none previously. So it’s no Khaleesi. (That one took me by surprise.)

Then there are moments where I think, ohpleaseNOdon’tcatchon.

Good Omens’ Warlock falls into that category. The Amazon Prime adaptation of the Terry Pratchett-Neil Gaiman bestseller gave us a kiddo with the impossible name. It’s a punchline, of course.

The story begins with a demon delivering a baby to be raised by a powerful American family in Europe. The unsuspecting parents have to name the baby, but they reject the (evil) nurse’s first suggestion: Damien. Instead, the nurse suggests Warlock, “a good English name.” The mom’s having a rough night, and had already decided against naming the baby for dad, so … Warlock it is.

Bear in mind that Good Omens is comedy. Satire. We’re not supposed to imagine Warlock, or any of the character names, might be an appropriate choice for a child. But it seems possible – just maybe – that we’ll see a baby with the name. Or five.

Though I’m hoping not. 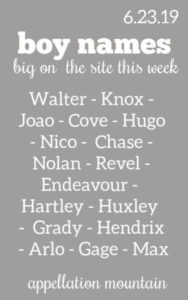 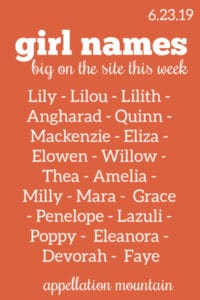 Image by Stefan Schweihofer from Pixabay