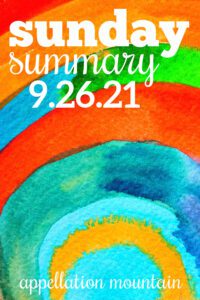 It’s that time again, when companies release their picks for Color of the Year.

Okay, there were some outliers. HGTV’s Aleutian is described as a washed-out indigo. And Valspar chooses a whole palette.

Just as I was musing about that, the incomparable Laura Wattenberg released her analysis of color names over the last two decades, and how they compared to the color names in vogue a century earlier.

It’s so worth a read.

And if you’re in the market for color-inspired names that aren’t on everybody’s list just yet? This post runs down all the more obscure choices. Think Crimson and Ginger and Fawn.

Are you a fan of color names?

Finnish baby names are fascinating. Okay, the Finnish language is fascinating, and so the names follow. Nancy has the new Top Ten. If you’re wondering how to pronounce Pihla, you can hear it here.

What would you name a sister for Astrid and Saskia? One of the most intriguing name lists I’ve seen in ages. (And not just because my daughter’s name is on it.)

I love the line about grandma Marjorie in this post. She once mentioned to her granddaughter that “the prettiest names have Ls in them.” And all these years later, her granddaughter is still following her advice! Probably not helpful for choosing names, but still kind of charming.

Are you reading the How I Named My Baby series at Nameberry? Love this interview about Cade Bennett. It’s a good reminder than even names that feel brisk and modern can be layered with meaning and significance.

Just for fun – this list of strange-but-true names. Because I somehow found myself on BabyCentreUK. Some of the references are so Brit-specific that I don’t get the punchline, and there’s a lot of “my friend once knew …” but lots of these made me smile. 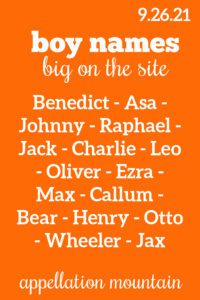 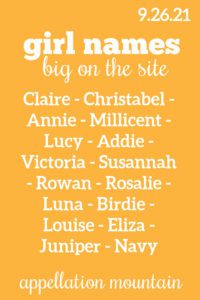