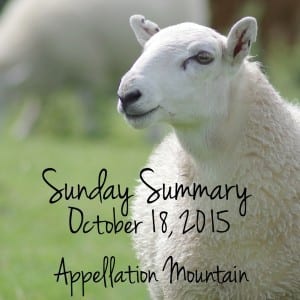 My kids name everything.

A few days ago, we made our annual trip to the pumpkin patch. Our preferred pumpkin patch comes complete with farm animals, including a pair of sheep.

“Their names are Dennis and John,” my son declared.

Dennis, John, Bob, and Bonnie? What’s with the baby boomer names for livestock?

I suggested that a sheep deserved a more romantic name, like Rigoberto. (I’d just finished writing this post.) My kids were not on board, but then, they thoroughly enjoy skewering my taste in names, while I quietly wonder if my future grandchildren will be christened Debbie and Gary.

Do you name things other than children and house pets?