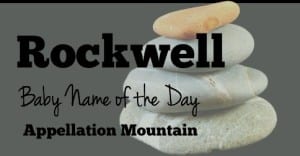 Our Baby Name of the Day is Rockwell.

Rockwell: In the 80s

If you’re a child of the 1980s, you might think of that lyrical ode to paranoia, the smash hit Somebody’s Watching Me, by Rockwell.

It turned out that Rockwell was the stage name of Kennedy Gordy, son of Motown founder Berry Gordy. Kennedy chose a stage name to avoid accusations of favoritism, and said that his new name expressed his intent: to “rock well.”

That’s not exactly a virtue name, but it is an aspirational one.

Long before synthesizers or MTV, this was a surname name.

No surprises when it comes to the meaning. It’s English, and originally a place name. The first element comes from hroc – rock. The second bit might refer to the woods, or maybe to a spring, stream, or well.

Like any surname name, it saw occasional and sparing use as a given name in the US. 1914 was the first year more than five boys were given the name in a single year, and there’s a smattering of baby Rockwells from then on.

Then came one very famous bearer of the name. It’s hard to think of an artist more associated with a sort of cozy, domestic mid-century Americana than Norman Rockwell.

From his Saturday Evening Post covers to works for the Boy Scouts of America, his illustrations are funny, memorable, often iconic.

And yet, he wasn’t all fluff. He put his version of Rosie the Riveter on the cover of The Saturday Evening Post. And, especially later in life, his work commented on social change, like “The Problem We All Live With,” showing a young Ruby Bridges being escorted into her newly integrated school.

Norman was part of an old New English family. His ancestor, John Rockwell, came to the colonies way back in the 1600s, and became one of the founders of Windsor, Connecticut.

During his lifetime, he was seen as an illustrator, rather than artist. Norman didn’t mind that title – it’s the way he described his work. And yet, later in life after after his death, opinion has shifted, and he’s now recognized as one of the greatest artists of the twentieth century. 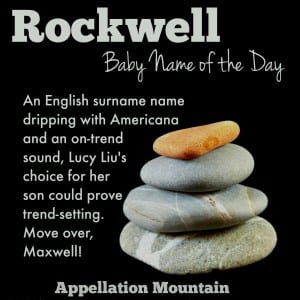 Ultimately, this name succeeds not because of the artist or the one-hit wonder or any other bearer of the name.

Together, it’s no surprise that Rockwell feels like an on-trend choice for a boy born in 2015.

Rockwell: By the Numbers

If you’re after a strong name for a son that feels conventional but remains rare, this is definitely one to consider.

What do you think of Rockwell? Does it seem too tied to the artist – or the singer? Or can you see it catching on?