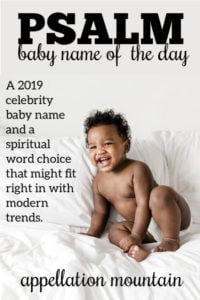 Our Baby Name of the Day carries deep, spiritual meaning – but is this a name at all?

The Greek psalmos referred to a song sung to a stringed instrument – a harp. It appears in Old English as pselam or salm. Over time, the spelling with the silent P prevailed, but that’s a little on the quirky side. In Spanish and Italian, it’s salmo; lots of other languages dropped the P, too.

We don’t think of a psalm as a song, though. Instead, we think of the Book of Psalms in the Old Testament. They’re pieces praising God. They are sometimes sung, in some contexts – but they’re also read, more like poems or letters, too.

The psalms were written over many years – centuries, in fact. Scholars suggest that the earliest writings date to around 500 BC.

So they’re ancient and complex, many of them universally known: think of Psalm 23, which starts, “The Lord is my shepherd …” Others are less familiar.

But most of us immediately recognize the word as spiritually significant, and have at least a sense of what, exactly, a psalm might be.

While there’s no question this name counts as unusual, the newest Kardashian is not utterly unique.

In 2018, eight girls and seven boys were given the name. It debuted in the US data way back in 1999, the year that five boys and five girls were named Psalm.

It’s not clear what explains the 1999 debut, but we can find some notable figures with the name. There’s a Hawaiian-born rugby player, for one.

Today, Psalm feels outlandish. But so did the name of Kim and Kanye’s second child and first son, Saint, born in December 2015.

Spiritual word names are having a moment. Some are outside of the Judeo-Christian worldview, like Bodhi. But many qualify as words familiar in a Christian context: Shepherd, Bishop, Creed all appear in the US Top 1000 for boys. Saint debuted in the boys’ Top 1000 this year. Gone are the days when names like Mercy, Grace, and Hope were reserved exclusively for our daughters.

It appears on my list of 125 One-Syllable Middle Names for Girls: Besides Grace and Rose. I described it as, “an old word that feels like a twenty-first century Christian possibility.”

I think the description applies even when Psalm is a child’s first name, even though I’ve written that it might be tough to wear as a first.

No question, this name feels unexpected. Maybe even outlandish. But it fits with several trends – it’s meaning-rich, and spiritual. Psalm feels slightly musical, too. And it absolutely fits the famous family’s naming pattern – with lots of one-syllable, big idea word names. While it’s much too soon to say, I can imagine Psalm rising in use over the next few years, as a middle and a first.

What do you think of Psalm? Will it catch on beyond the Kardashian family?