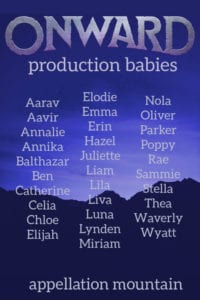 Time for the Onward production babies!

Disney-Pixar’s latest big screen entry is Onward, a tale of two brothers on a quest to re-unite their family … if only for one day.

It debuted in theaters just weeks before everything changed. That means many families – including mine – saw it for the first time on Disney+.

Not my first choice, but hey – it made it easier to check out all of the Onward production babies.

What are production babies, you ask? Because it takes a long time to put together a Disney-Pixar production, many of the crew welcome children over the movie’s development. And those babies’ births are included in the end credits for every Disney-Pixar movie.

The tradition started at Pixar, but even straight-up Disney flicks like Frozen 2 include the lists now. And I’ve seen them in other studios’ animated movies occasionally, too.

At just 31 names, this makes for one of the shorter lists. But there are some true standouts here!

Disney-Pixar parents, like parents everywhere, tend to favor mainstream favorites. They may not count as classics, but they’re broadly recognized, and easy to spell and pronounce. In another forty years, we’ll forget that some of these names ever seemed novel.

Both #1 girl and #1 boy names from the US are represented, with production babies Emma and Liam.

On the boys’ side, there’s Elijah, Oliver, Parker, and Wyatt.

The list begins with twins Aarav and Aavir. Aarav comes from a Sanskrit phrase meaning “peaceful melody.” I’m not sure about the origins or meaning of Aavir, but it seems likely to be similar to his brother’s name.

CLASSIC WITH A TWIST

Two elaborated Ann- names made the list of production babies.

First up: Annalie, a sort of mash-up of Anna Lee and Rosalie. The German Anneliese has attracted attention in the US, though we’ve respelled it Annalise, Annelise, and Annalisa, depending on our preferred pronunciation.

German and Scandi Annika feels a little more familiar, but first appears in the US Top 1000 in the 1990s.

While production babies tend to receive more creative names, the opposite can be true, too. Every list contains a few quiet, understated classics.

For Onward production babies, that means Ben and Catherine.

First up, Celia. The frillier Cecilia outpaces it by quite a bit. (Though technically, they’re separate names.) It’s also a Pixar name, thanks to Monsters, Inc. Shakespearean Celia still wears well today.

Speaking of Shakespeare, Juliette adds an extra -te to become to most popular spelling in the US as of this writing.

Miriam feels like one of the next wave of classic girl names, thanks to The Marvelous Mrs. Maisel. It’s one of the girl names I’m watching for 2020.

Then there’s Waverly, which recently debuted in the girls’ Top 1000.

Slim, spare Rae and nickname-name Sammie round out the list. Along with Waverly, these last three lean a little more unisex, but are typically feminine in the US.

First up, Poppy. It’s a British favorite, a floral name quickly catching on in the US in recent years.

Thea, sister-name to Theodore, is among the hottest of traditional-ish girl names of our moment.

And then there’s Nola, with several possible origins, and an undeniably stylish vibe.

Liva probably comes from the Scandinavian Liv – life. It’s almost unknown in the US, but it’s big in Denmark.

I’ve added Erin to this list, mostly because it peaked in the 1980s. It’s surprising to see on a child today … but I think it still works with so many spare, tailored girl names.

Name enthusiasts adore Elodie, but the French feminine name is rare in real life. And Lynden surprised me, too. It fits with unisex, surname-style choices like Rowan.

But the prize goes to Balthazar. It’s old school and bold, a name with history galore. Legend tells us that one of the Wise Men who visit the newborn Jesus is called Balthazar. It takes long, elaborate boy names like Sebastian and Leonardo and turns it up to eleven.

That’s all for this list, but look below for links to even more production babies posts.

What do you think of the Onward production babies? Any favorites here? 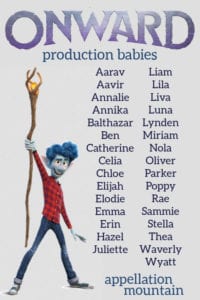 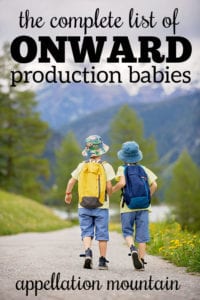