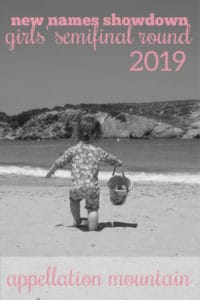 Time for the next round in the New Names Showdown 2019 for girls! One of my favorites is already out. But that’s just the way it goes … not every one of the new names can win.

If you’re new here, the New Names Showdown is an annual summertime extravaganza to determine the most stylish, most likely to trend-set of the new crop of names. Every May, the US Social Security Administration releases all the data on babies born the previous year. Among the 1,000 girl names on their most popular list, a few dozen are either brand new to the rankings, or back for the first time in a year – or sometimes much, much more.

I pick my favorites. And then you tell me which ones really are the stand-out stars.

The competition started with a bang last week, with eight girls’ names trying to carry the day. Read the results here:

That means that Zora, Bellamy, Violeta, and Scout advance this week. The contests could be fierce!

We all love Nora and Cora, so no surprise to see Zora on the rise, too – especially with that great meaning: dawn. And To Kill a Mockingbird has boosted Harper and Atticus, so why not Scout?

Modern surname name Bellamy owes something to Annabelle and Isabella. And we couldn’t possibly have Violeta without the runaway success of Violet. But which do you prefer?

Now it’s all up to you! Voting will stay open through the morning of Thursday, July 18th. The winners will be posted on Saturday, July 20th. You’ll get to vote in the final round then! We’ll see who wins it all on the last Saturday of July, and add one more name to our circle of champions … Arden, Sylvie, Marlowe, and the name you choose next!