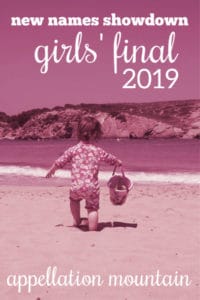 It’s here! We started with eight of the most promising new girl names: Promise, Scout, Emmarie, Violeta, Bellamy, Wendy, Anais, and Zora. We whittled those down to four, and now just two are left.

One of these names will join our circle of the best of the names debuting or returning to the US Top 1000 in a given year. The goal? To pick the name mostly likely to rise in use in the coming years, to transition from a name on the fringes to a mainstream favorite.

Before we move on to the voting, let’s look at the results of the SemiFinals.

In the first match-up, the elegant Zora edged out Scout by a healthy 63% to 37%. We love a good Z name, and Zora picks up on the sound of Nora and Cora, with a meaning that brings to mind Luna and Stella, too. It’s Slavic, meaning dawn. This contest started out closer, but Zora pulled ahead and held the lead.

The next contest was closer, but ultimately Bellamy carried 55% of the vote, versus just 45% for Violeta. Bellamy picks up on our love of surname names and three-syllable, ends-in-y picks for girls, a successor to Kimberly and Avery and Delaney. But it also reflects so many girl names with the Belle sound in recent years.

That means our last contest comes down to Bellamy versus Zora. They’re both twists on current favorites, the kind of names that feel just a little bit different.

But which one will join Arden, Sylvie, and Marlowe in the victors’ circle?

That’s up to you!

The poll will remain open through Thursday, July 25th. Check back on Saturday, July 27th to hear which name joins the winners in the victor’s circle.

Every vote counts – and every vote is very much appreciated.