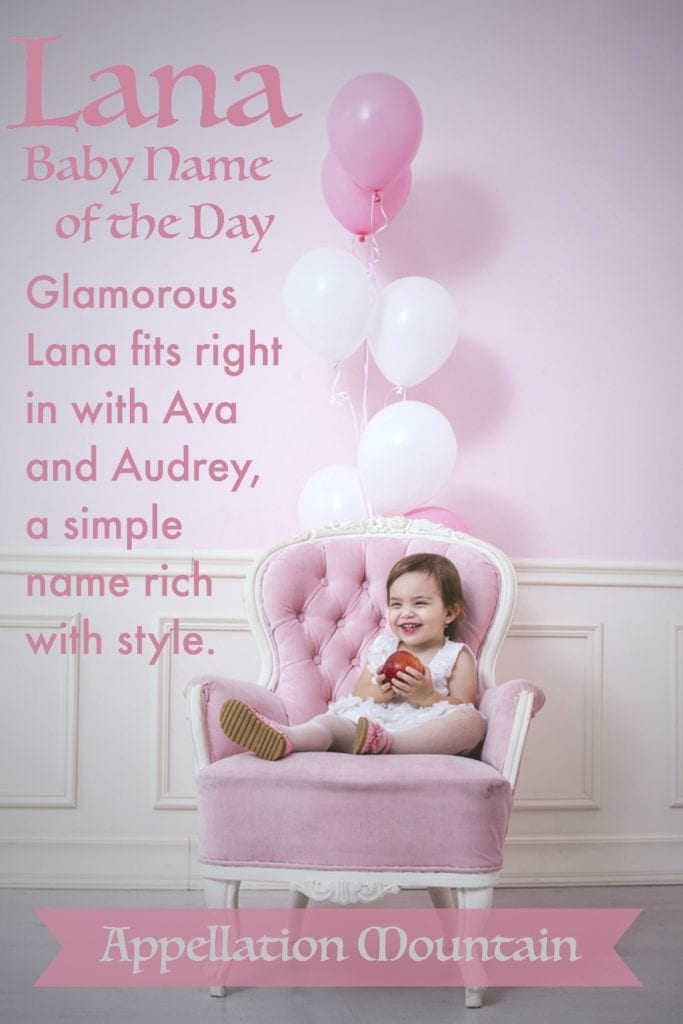 Lana shimmers with all the Hollywood glamour of Ava, but this name owes its recent success to the small screen.

File this name with Nora, Nina, and Lisa.

It started out as a short form of Alana, Milana, Svetlana, and any other name ending with the same four letters. In some cases, nickname names always feel like they’re short for something – even when they’re not. (Hello, Ellie!) But certain names – call them the Nora-Nina-Lisa Club – stand on their own.

Julia Jean Turner skipped school to sip a Coke at a drug store on Sunset Boulevard, and it changed her life forever. As fate would have it, the publisher of the Hollywood Reporter spotted the sixteen year old high schooler, and referred her to a talent agent.

She filmed her first movie in 1937, and rocketed to fame.

Scandal and drama followed, but so did professional success. The young Miss Turner graduated from pin-up to serious actor, with roles in The Postman Always Rings Twice, Peyton Place, and Imitation of Life.

As for her stage name, it appears the young Turner chose it herself.

While the name occasionally appeared in the US Top 1000 in the nineteenth century, the star brought the name back into the spotlight.

A 1940s favorite makes an unlikely revival for 2001. But that’s exactly what happened. Lana returned to the US Top 1000 after several years’ absence.

Parents embraced other Hollywood legend names for girls in the early twenty-first century. Ava and Audrey were racing up the charts.

The name also fit with popular choices like Hannah, a Top Ten favorite in 2001, and our love of all L names was just beginning, too.

But chances are that Superman gets the credit.

Lana Lang debuted in the Superman comics back in 1950, a romantic interest for the Man of Steel. Miss Lang hailed from Clark Kent’s hometown, and became a rival to Lois Lane.

Naturally, Superman prequel Smallville included Lang in the cast from the very first episode. The year? 2001.

Smallville left the air in 2011. By then, the name had returned the Top 500. It’s continued to climb since then.

Besides the Hollywood legend and the Smallville character, you might also think of Lana Wood, sister to Natalie and most famous as a Bond girl, along with a handful of other fictional characters, song lyrics, and international figures. The name appears in the Croatian and Slovenian Top Tens.

But perhaps the reason the name remains in the spotlight is signer Lana Del Rey, who released her first album in 2010. Miss Del Rey borrowed her stage name from the legendary actress.

Or maybe it is Archer’s character by the name, a spy voiced by Aisha Tyler beginning in 2009.

Whether it’s the singer or the secret agent, this name remains a surprising revival choice, ahead of its time. It makes a good option for parents after something familiar, but not too popular, sophisticated but not too elaborate. Lana feels as nickname-proof as Emma, as feminine as Sophia. And if you’re crushed that Ella and Mila rank in the Top 100, Lana might offer a substitute.

What do you think of Lana?

This post was published on March 27, 2009. Following substantial revision, it was reposted on December 5, 2016.