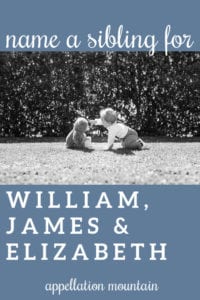 My husband and I like very traditional, classic names. But we’re naming our fourth child and third son, and I’m worried that it sounds a little … pretentious? Stiff? Boring? We know lots of little kids and I like the names that everyone is choosing better than ours! But my husband says it would be weird to have Will, Jamie, Beth, and Maverick. (Not that I really want to use Maverick.)

All of their middle names are family names. We alternate sides. This baby will probably have the middle name Hunter, my grandmother’s maiden name, or Anthony, my grandfather’s name, but only if the initials don’t spell anything. Our last name is like MacMillen, and we almost named our firstborn William Anthony M- until we realized he’d go through life as WAM. We didn’t like JAM any better for Jamie, either, LOL!

Charles – It’s a lot of royal family names, right? Also, I love Charlie for a baby and a kid, and maybe a teenager. But Charles does nothing for me. Chuck? No.

Henry – We know three boys with this name, though I guess none of them are super close to us. I’m not sure how I feel about Henry Hunter.

Max – But Maximilian is crazy, and sort of sing-songy with our last name. I’m not sure if any of the other longer Max names “go” with our other kids’ names, though I think I like Maxwell. Just Max seems too short.

Michael – I love Michael, but Mikey doesn’t appeal AT ALL. But can we really call a sweet little baby Michael all the time?

Thomas – I think this might be the name. Except Will is obsessed with trains, including Thomas. Will it be like we named our son for a talking train? I’m not sure if it ruins the name for me.

My husband is Matthew, and his brothers are Nicholas and Joshua, so those names are out. We don’t want to repeat initials. (Another reason we’re thinking maybe Max and Michael are out.)

If we have a girl, we’d probably name her Mary Katherine, though I’m beginning to have the same worries about girl names, too. Maybe even more! (Katherine would be for me. I’m Kaitlyn, but I’m always called Katie/Kate.)

Let’s start with a few ideas.

This is baby four, and it sounds like you’re open to having more children, right? That qualifies as a bigger family. You have a choice: stick with all of your rules, even if it means picking a name you love less. Or be a little more flexible, and maybe find a name that you adore – even if it bends (or breaks) some of your rules.

When you have two kids, no one really worries too much about patterns. Their names both start with E? Oh well. They both share their names with iconic Hollywood screen legends? Shrug. There are only two. It’s not enough to see them as a series, right? But somewhere around the number four, things do change. Ella, Emma, and Edward really might push you to insist on an E name for your fourth child. And if your older three have family middles, then you really can’t drop it now.

But it’s never too late to break them.

If you have a bigger family, it almost inevitably means you’re naming children over a decade or more. How many of your favorite things from ten years ago are still your favorites? Some things endure. And other favorites? Well, we move on. It’s perfectly fine to do this with names, too. What you interpret as a sharp departure in style will probably go unnoticed by most of the world.

So yes, Maverick might be a little extreme. But you could name your son something more current … Cameron, maybe? Harris, Sebastian, Everett … and some people might notice. But after a few months, it would sound perfectly natural.

I’m going to suggest some J names. Because while you could, in theory, have 24 kids before any one in your family needs to share an initial, it’s worth considering whether you want to stick with that rule.

ALEXANDER – A long name that shares Maxwell’s X, Alexander manages to be classic enough to fit with brothers William and James, but slightly less to-the-castle-born.

JONATHAN – A nickname rich possibility, longer than John, but still in the classic camp.

JOSEPH – The first name I thought of, and the reason I think it’s worth revisiting the repeating-initials rule. Joey is darling. Joe is a rock solid name for any age. And Joseph? An unassailable classic.

MAXWELL – I agree that Maximilian is a lot with your surname, and maybe Maximus is just a lot. But Maxwell could be great.

PATRICK – Patrick is handsome in full, but I’m guessing you might not be wild about Pat. But what if you called him Patch instead? It’s sweet on a baby, wearable on a teenager … and I like Patrick in full for a grown-up.

THEODORE – Along with Henry, Theodore is one of those classic names that feels traditional and stylish at the same time.

But if I none of these appeal – or if I haven’t convinced you to re-think the letter J – then let’s look back at your original list. Because Thomas? Is pretty much perfect.

We, too, went through a train phase that felt endless. We tripped over tracks. We spoke of “confusion and delay.” But a) the phase doesn’t actually last forever and b) one of the strengths of classic names is that no one else assumes you named your kiddo for a tank engine. That means your train-loving kiddo gets to enjoy his new brother’s name … but very few adults will assume you were thinking of the Island of Sodor when you chose it.

So I’m tempted to put Thomas Anthony MacMillen at the top of my list. From my suggestions, I wonder if you’d like Alexander? But if I could talk you into Jonathan – Johnny, Jono, Jack, Nat, Nate! – that might be my favorite of them all.

Readers, what names would you suggest for Katie’s new son?