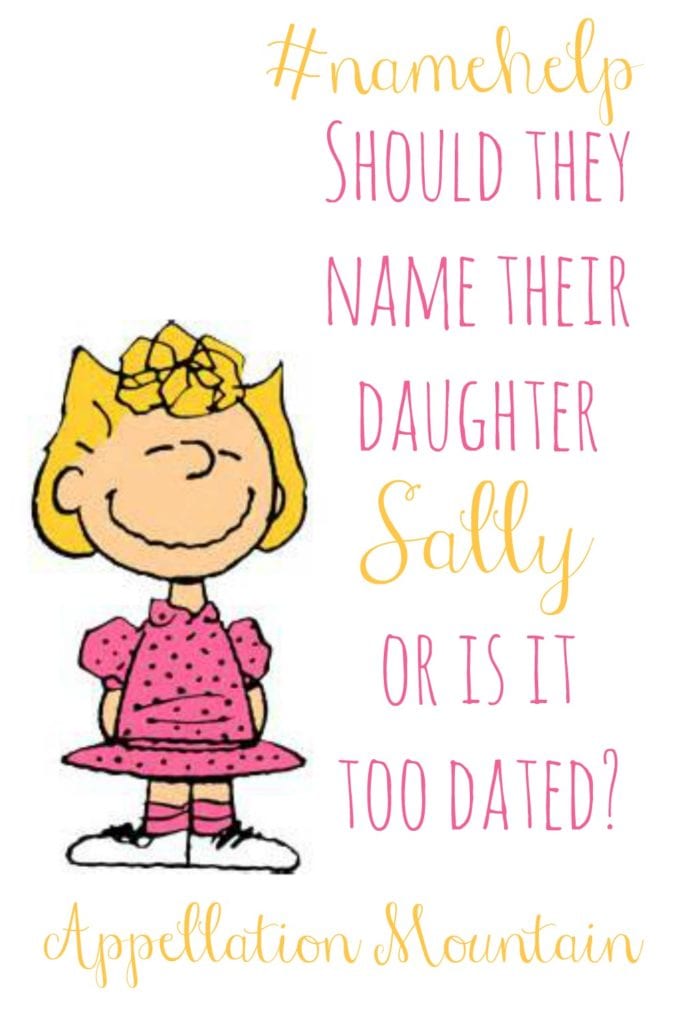 Update: She’s here! Scroll to the bottom to learn if they went with Sally.

We have a two year old son named Jonah Michael, and now are expecting a daughter due on December 28. With Jonah, we agreed on his name almost immediately. I like that it is not too popular, but that everyone knows about it, and I like the story of Jonah and the whale. Michael is for my husband, and it is my brother’s name, too.

For girls, we don’t really agree on anything. I like long, pretty names like Arianna, Gabriella (doesn’t work with our last name), and Alaina. He says they’re too froufrou. We were thinking about Molly, which I like, even though it’s not really my style.

And then he suggested Sally. Sally was his grandmother. She died before we met, but everyone in the family adored her, and the stories about her are great, too – definitely ahead of her time.

The more I think about it, the more I like it. Except when I tell other people we’re thinking about Sally, they sort of make a face. My sister says my daughter will hate me if I give her such an old-fashioned name.

But there’s really no other name that I like. Would we be crazy to name our daughter Sally in 2016?

Our last name sounds like Keller with a G.

The general question you’re asking is this: when your favorite name is out of favor, should you embrace it? Or move on? We’ll get back to that in a minute, but first, let’s look at Sally.

That tracks with our pop culture associations with the name:

When Mad Men made all things midcentury fashionable, I wondered if Sally Draper – eldest daughter of Don and Betty – might spark a revival in the name. But it didn’t happen, despite the marvelous Kiernan Shipka. Sally left the US Top 1000 around 2004. The show debuted in 2007; while I see a possible tiny uptick in use post-Mad Men, it wasn’t enough to change direction.

As of 2015, 221 girls were given the name. That number holds steady over the last few years, swinging from 207 to 218, but never showing any real signs of movement. It’s stuck in style limbo.

If Sally had not been stylish in the 1950s, it might be big now. Consider:

This is good news. Some names – like Gertrude and Lorna – land in style limbo because of their sounds. Sally does not. It sounds like a 2016 name, but because we associate it with an earlier era, that takes it off the table for many parents. But from a child’s perspective, I think the name would wear as well as Molly.

So while the name is out of favor, I think that it would feel like a reasonable choice to your daughter and her peers.

I think you have a few options:

The truth, of course, is that you can never predict how your child will feel about having any name, whether it is current, classic, or anything else. I tend to think that names with meaning work best over time. Maybe she’d rather be Ava in middle school, but as she grows up, the connection to a great role model will mean more.

My sense is that you should embrace Sally, confidently explain to others that it honors her fantastic great-grandmother, and assume that you’re a decade or two ahead of the trends.

But I think a poll will really help here, so let’s open this one up to the readers.

Danielle writes: Thanks for all the help! Up until the last minute she was going to be Sarah, called Sally. But we decided that would be too confusing. (Pretty much no one we told thought that Sally was a nickname for Sarah.) So we were down to Sally or Molly, and when we told Mike’s family that we were thinking about Sally, well – that did it. She’s Sally Elizabeth, and the name is just perfect.