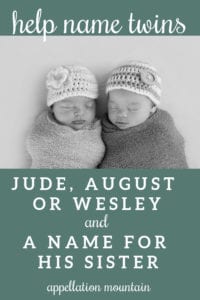 Name Help is a series at Appellation Mountain. Every week, one reader’s name questions will be discussed. We’re relying on thoughtful comments from the community to help expectant parents narrow down their name decisions. Thank you in advance for sharing your insight!

We are due with boy-girl twins in January, but it looks like they’ll probably be here before the end of the year. Getting here has been a struggle, and we’ve avoided talking about names until now.

For our son, we know we don’t want him to inherit my husband’s name. My husband is a III, and while his family would like us to pass down the name again, he’s not on board. We’ll use James as his middle name, instead.

We’ve even debated using my husband’s full name, James Oliver – so our son has two middle names. Our last name is a common, two syllable H name, so we don’t mind a long name.

First names feel hard, though. We’ve narrowed our list to:

I think we could be happy with any of these.

For our daughter, we’re all over the place. No first name seems right, and we really don’t have a middle name that we want to use from my family. (There are some we could use from his, but I think my family would feel like that was too much.) The only name we both don’t dislike – so far – is Maria. But we agree it doesn’t feel like her name, if that makes sense.

Where do we even begin?

First, congratulations on your children! Naming twins is a twice the challenge – and maybe a little more, too. Not only do you have to choose two names you love, there’s a sense that the names need to balance – probably more than if you were naming a brother for your older daughter, or vice versa.

Let’s start with boy names, though, because you’re almost there.

I’d describe your style as gentlemanly traditionals. They’re masculine, but they’re not swinging-through-the-saloon-doors kind of guys. They’re a little more polished and thoughtful, but still strong.

Gentlemanly traditionals – these are not the guys swinging through the saloon doors in the Wild West. (Though I suppose they could.)

So let’s not add to your list. Instead, let’s talk about your three favorites.

First, Wesley. Some names have default nicknames, like Benjamin-called-Ben. I’d put Wesley almost in this category. I’ve known people with this name who never shorten it. But it’s something of an obvious choice. If Wes bothers you, I’d strike this name off the list. It’s just too likely that it would stick.

Jude James being called JJ, on the other hand? It certainly could happen. Kids come home from school (and camp and sports practice and play rehearsal) with all sorts of daffy nicknames. JJ isn’t unimaginable. But it’s not automatic. And even if your son’s baseball team called him JJ, well … you certainly wouldn’t have to do the same.

That leaves August. Contrary to our impression, August doesn’t mean “peak summer.” It means venerable; after all, Augustus started out as a title for the Roman emperor. So it seems like fair game to name a baby August any month of the year. Do I hear the crashing waves of the ocean with this name? A little. But it also sounds like a name that belongs in front of a roaring fire, a brother for Emmett. I’d say it fits with homespun boy names – just like Jude and Wesley.

Between August and Jude, I think I’d favor Jude – if only because you don’t have to think about the question of seasons. But let’s wait until we find a name for your daughter, and then revisit the question.

NAMES FOR YOUR DAUGHTER

I can imagine Maria as a sister for Wesley, August, or Jude – but it might not be my first thought. Let’s see if we can find something feminine, traditional, but still with some current style.

ALICE – A storybook name with a lot of strength.

NORA – Everyone loves Nora, a choice that’s both timeless and current at once.

RUBY – A gemstone name with a straightforward sound.

STELLA – The meaning – star – is gorgeous, and the sound is perfect with August or Jude.

THEA – A short, sparky name that’s on the rise.

WILLA – Willa strikes me as homespun name in the key of August.

PUTTING IT ALL TOGETHER

If you agree with my conclusions so far, we’re down to two possible boy names: August James or Jude James.

Now here’s where I want to suggest something about your daughter’s middle. How about Olivia? It splits up your husband’s family name between the siblings.

If not Olivia, would you consider Elisabeth or Elise? Or something else that nods to your name? (Lisette, Lys, just Lisa?) I’ve also seen Isla suggested, since it’s an anagram of Lisa.

That leads me to:

I think that last one – Jude James and Thea Olivia – is my favorite. But I’ll be so curious to hear what readers think about this one!

What names would you suggest for Lisa’s boy-girl twins? Any tips for handling the family name issue?