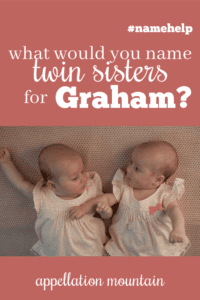 Hello there! We have a son, Graham, and are expecting twin girls this spring. We’d both like the female equivalents of Graham – classic and familiar but underused – but are having a tough time agreeing.

We’d like names that are strong versus delicate or overly girly.

We’re open to names that stand on their own, the way Graham does, or names that also have nickname possibilities.

The only names we’ve remotely agreed on are Madeline (my husband’s top pick) and Eleanor, but both are fairly popular (particularly Eleanor) which gives me reservations.

Names I like but my husband doesn’t: Florence, Frances, and Matilda.

Names I like and my husband is possibly open to: Margaret (I like the nickname Maisie), Fiona, Corrine, and Vera.

Thank you in advance for any help you can give!

Twin daughters – how exciting! Congrats to you + your family.

Graham strikes me as un-fussy, a straightforward name that is tough to tie to any particular decade. People recognize it. I mean, everyone knows of a Graham or two, right? And yet it’s not a name that repeats too terribly often. I’d guess that the average Graham might go decades before he has a classmate or colleague by the same name. And yet, no one would ever dismiss it as a name that’s too different.

So what’s the feminine equivalent?

It’s not Madeline. You sort of know that already, because it is very popular. But here’s the thing about Madeline: it has multiple potential spellings. I counted eight in the current US Top 1000, and I know of at least two more in use on real kids. Madelyn is actually the most common spelling. Tally them all up, and it’s a name that’s been in heavy use for a decade or more.

Actually, lots of the names on your list seem like they have potential. But let’s see if we can think up some fresh ideas.

The challenge is this: names like Elspeth and Tamsin seem like obvious suggestions. But they’re a little too different, aren’t they? So let’s see if we can find something slightly more mainstream, without tipping into Madeline territory.

Brenna – Back in the day, Brenda was big. Jenna, too, No surprise, then, that Brenna saw some use. It peaked in the 1990s. And yet it doesn’t feel like a 90s name, not the way that Brittany and Ashley do. Plus, it means strength or maybe raven … both of which feel auspicious.

Claire – Spare, trim names like Jane and Mae are obvious suggestions. But I think it’s Claire that feels most Graham-like. The challenge here: does that mean that Claire’s sister would also need a single-syllable name?

Elise – Evergreen Elizabeth is always popular, but how about gentle Elise? Originally a short form, it stands on its own today. And, like Graham, I think it feels timeless. Another in this category? Ellen, which couldn’t be a sister for Elise, obviously – but does pair nicely with Graham, and substitutes for the more popular Eleanor.

Maeve – Sharp, stylish, and under-the-radar, Maeve could be great. Except it’s rising pretty quickly, thanks to a mix of an on-trend sound and a character from Westworld. For the moment, Maeve isn’t even in the US Top 300 – but five years ago, Maeve wasn’t in the Top 500. So it’s possible a Maeve born in 2019 might babysit a bunch of kiddos with her name in another fifteen years or so.

Maura – Maura last appeared in the US Top 1000 in 2006. Doesn’t that seem bananas? Like Graham, it has nicely Scottish roots. It’s familiar, but rare. One downside: it might be misspelled Moira, and Moira can be pronounced with an ‘oy’ sound as well as rhymes-with-Laura. I love the idea of Maura and Fiona as sisters for Graham.

Teagan – You’ve mentioned that you prefer strong names, and it also sounds like you’re found of straightforward ones. But is something like Teagan too modern and unisex? It seems to fit your criteria, and yet I’m not quite certain it’s your style.

One additional thought: have you ever considered naming your daughters Ann and Louise? Or Anna and Louise?

With all of these possibilities, here are my favorite combinations:

Anna Madeline and Louise Eleanor – Because your family names are great, strong, timeless choices that sound exactly right with Graham.

Maura Ann and Fiona Louise – They’re a little more conventionally feminine, but not in a frilly way.

Ellen Ann and Frances Louise – Just in case it’s possible your husband might warm to Frances! It’s got so much of what you’re looking for in a name …

Margaret Louise and Frances Ann – Or how ’bout Margaret and Frances, called Maisie and Frannie?

Overall, I’m most curious if you’d consider Louise and Anna. If not, Maura and Fiona seem like a logical pair.

But let’s turn it over to the readers, because I know there will be some great suggestions! What would you name twin sisters for Graham?