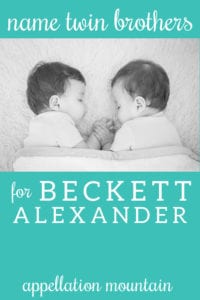 Name Help is a series at Appellation Mountain. Every week, one reader’s name questions will be discussed. We’re relying on thoughtful comments from the community to help expectant parents narrow down their name decisions. Thank you in advance for sharing your wisdom!

We named our almost 4 year old son Beckett Alexander H—z (like the ketchup) after weeks of going through a very long list of maybes. I wasn’t sure about Beckett when we chose it, but now I can’t imagine his name being anything else.

I dusted off our list from before, and we’ve added a few new names. We also crossed off ones that seem too much like Beckett (Everett, Elliott, Emmett, Bennett), plus ones that close friends have used over the past few years (Nolan, Landon, Parker, Lane, Royce). Though I don’t think we’d use Royce anyway because anything ending with the s/z sound isn’t great with our last name. We don’t want an H first name.

That leaves Carter, Sullivan, Spencer, Easton, Grayson, Camden, Blake, and Walker. It’s not that we only like last names for names, but they are the ones that we tend to agree on. My husband also likes Brendan and Jonathan, but I don’t. He really likes Brady, but I don’t like the idea that people would think we was named after the quarterback. Also, I don’t want to repeat initials unless we’re really stuck.

Popularity doesn’t really matter, except we probably don’t want to use the most popular names, so no Liam or Noah. Oh, and my husband shoots down any name ending with a, except for Dakota, but that’s another football thing that I want to avoid.

I think we could find one name from this list – maybe? But I’m not sure how to find two that make sense as brothers for Beckett.

For middle names, we’re pretty set on Joseph and Matthew.

First, congratulations on your new sons!

There is something about finding twin names that seems a little more challenging, isn’t there? But I’ve always appreciated the approach of naming your next two children … and then checking that they sound like brother names after you’ve picked your favorites.

Happily, this is the path you’re already on, so let’s keep going!

We’re ruling out a few things:

That leaves names starting with 24 letters of the alphabet and (probably) ending with -n, -r, or -y. Or maybe something like Blake – but there’s that repeating B again!

That’s not a long list, but I think it might be plenty of choices for your purposes.

You’ve already eliminated all of the logical nope-won’t-work choices.

I’m going to suggest dropping Sullivan, only because it’s a little longer than your other names. Camden, too, because I can imagine Camden being Cam, and you seem to favor nickname-proof names. And while Spencer fits in many ways, it’s a 90s favorite that’s falling in popularity in recent years.

Are these arbitrary reasons? Yup, absolutely! But let’s test out how they work. If you’re feeling a pang right now – if the idea of letting Camden go is downright painful – then that’s a good sign that Camden should stay on the list, and maybe even be part of the final choice!

For now, we’re working with Carter or Walker, Easton, or Grayson.

I could almost flip a coin!

But I think I’m going to vote for Walker Matthew and Easton Joseph. My reason isn’t a terribly strong one: they’re slightly less popular than Carter and Grayson, which brings them closer to Beckett on the popularity charts.

That always feels like part of what makes siblings names feel right together. Though it’s not necessarily a great guideline. After all, name popularity can shift dramatically over time – and by 2025, Walker might be #25 and Beckett tumbling into the 400s.

Yet, as with dropping Spencer, Sullivan, and Camden, it’s more about testing out what works and seeing if it feels right.

And I think Beckett Alexander, Walker Matthew, and Easton Joseph are absolute perfection together.

Readers, over to you! What would you name twin brothers for Beckett Alexander?