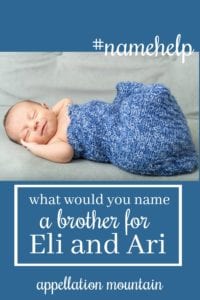 I love the name Rory for our new son.

But our last name sounds like North with a ‘y’ ending. Does this first-last name combination sound ridiculous?

Any other suggestions? Big brothers are Eli and Ari.

I would like the name to end in either i or y. Thanks!

Ooh … this is tough! First, I love Rory and think it goes so nicely with brothers Eli and Ari. They’re similar, but not so close that I trip over the names.

But with your surname? Rory North+y does feel like a tongue-twister. I’d almost certainly look for another option.

And yet, I come back to something Swistle often says. If you like that quality, then it’s a feature, not a bug. Since Ari has a strong ‘r’ sound, I suspect that’s part of what draws you to the name.

Still, let’s look at some other options, and see if anything leaps out.

Bodhi – A modern, spiritual name, there’s a complexity to Bodhi. It’s much longer than spare, straightforward Eli and Ari. And yet, I think they sound like brothers. And while you might find this name spelled Bode or even Bodie, I think Bodhi is broadly accepted as a common spelling, making for a third ‘i’ ending name.

Kai – Is this cheating? Eli, Ari, and Kai are all just three letters, and all end with ‘i’, too. It makes for some appealing visual symmetry. And yet, Kai doesn’t end with the same sound, so I’m guessing this one is out. But if you’re willing to re-consider, I think Kai North+y sounds great, and works well with Eli + Ari.

Levi – Have you considered Levi already? It’s the first one that came to mind. Like Eli and Ari, Levi has roots. It’s not exactly traditional, not in the buttoned-down Joseph or Thomas kind of way.

Loki – Okay, I don’t think you’ll consider this name. I’m not sure that you should! Loki is, after all, the villain of many a Marvel movie, Thor’s ever-jealous adopted brother, out for power and glory. And yet, Kylo now ranks in the US Top 1000. So maybe, just maybe, we can cautiously consider Loki? For what it’s worth, the mythological figure isn’t always on the side of wrong.

Noe, Noi – Everybody knows #1 name Noah. But Noe and Noi are forms of the name, and they do end in the same sound as Eli and Ari. The downside: they might be pronounced “no” or “noy” rather than no-ee. But we all recognize that Zoe and Chloe take an ‘ee’ ending, so I suspect Noe would quickly catch on.

Remy – It’s Rory’s repeating-R sound that gives me pause. But lots of other R names, like Remy, Riley, Radley, Rooney, or Ramsey might all fit. I put Remy at the top of this list mainly because it’s gaining in use right now. Once obscure, Remy is rising. But that might be to your advantage – it means that it’s about as popular as Ari is today.

Xavi – Xavi comes from Xavier, a logical short form of the saintly surname. It’s rare as a stand-alone name, at least in the US. But it could work. After all, names like Eli and Ari are perfectly mainstream. In fact, I thought of Xavi only after rejecting Avi as too close to Ari. The spelling Zavi might be another possibility, but I like the X factor best.

Wiley, Wylie – Plenty of surname names end with the right sound, including choices I listed with Remy. In fact, I had Riley on the first draft of this list, before thinking it might be too much R. Grady also seemed like an intriguing option. But I’ve landed on Wiley – or Wylie. Why? I think the softer sound of the Wy- sound balances out your surname nicely.

In fact, I think I like almost any of these better than Rory. Not because of the name, of course, but because that repeating ‘r’ seems like a lot of roaring, rushing noise. Kai tops my list for Eli and Ari’s brother, but if the lack of an ‘ee’ ending sound bothers you, I’d suggest Levi. Eli, Ari, and Levi.

Now, over to the readers – what would you suggest as a brother for Eli and Ari?