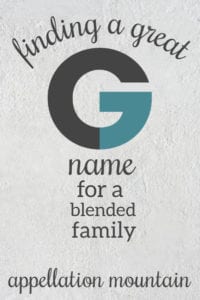 Can you help us with a puzzle, dear Appellation Mountain readers?

I’m Bree (really Breanna, but Bree to everyone who knows me) and my new husband is Dan.

We brought four children to our marriage: my son Abel and daughter Felicity, and Dan’s boys, Carter and Easton.

We’re now expecting our first – and probably only – child together. My sister pointed out that we are currently Abel, Bree, Carter, Dan, Easton, and Felicity, so this baby should have a G name.

Maybe it’s silly, or maybe it’s one of those self-imposed rules that only makes life hard. But right now, it feels like the perfect way to put our whole crazy Brady Bunch together.

Dan isn’t super into names in general. (His ex-wife chose the boys’ names.) But I like all sorts of romantic, vintage-y names, and he sometimes vetoes those.

Can you help us come up with some cool G names that are a little bit old-fashioned, but not Gertrude and Gerald? And we aren’t finding out – the kids wanted to make it a surprise! – so we need names for a boy or a girl. (Just making this as crazy as possible!) The baby’s last name will be William-with-an-s.

Congratulations on your new baby! And what a fun coincidence to discover – and an appealing way to narrow down your shortlist, too.

First things first: if you can’t find a G name you love, then yes, you should feel free to walk away from the pattern.

But it sounds like you’re open to lots of possibilities.

Should this baby be a girl, she’ll be Felicity’s only sister! And that makes me think it’s important to match that style. We need something romantic, elaborate, and vintage, but not too dusty.

Genevieve – Probably my favorite. It’s a G name that sounds exactly like a sister for Felicity, without sounding like you worked too hard to match them.

Gemma – While Gemma feels a little more modern, it has history aplenty. Thirteenth century Italian author Dante Aligheri was married to a Gemma; the Italian Saint Gemma lived in the late nineteenth and early twentieth centuries.

Gloria – Gloria was wildly popular for decades in the twentieth century, which explains why we tend to think of it as a little tired. But if it’s really the perfect sound for 2020, a mix of Cora and Olivia.

Greta – I think we’ll hear more of this name, thanks to inspiring young activist Greta Thunberg. But even without Thunberg making headlines, there’s lots to like about this name. It’s originally short for Margaret, so it has a classic pedigree. But it’s brief and complete, a G name that feels instantly familiar, but isn’t terribly common.

Gwendolyn – I’m not sure if any of your kids favor nicknames, but if so, Gwendolyn might be perfection. It comes with tailored Gwen and retro Winnie – though that takes you away from the letter G. It’s also spelled Gwendolen, with a final E, but the Y spelling is consistently more popular in the US.

The name Abel may belong to a different era than Carter and Easton, but all three names offer strong sounds and come with varying endings. Let’s see if there are some good options that add yet another ending sound into the mix.

Garrett – Garrett peaked in the 1990s, but it was never so wildly popular that it feels too tied to the decade. Fun fact: it’s a surname related to Gerald, but feels far more modern.

Grady – I’d always expected Grady to follow Brady into wider use. And it did … but absent one super-star quarterback, Grady feels much less flashy. I think that makes it a good match for Abel and Felicity, while it shares the surname-style of Carter and Easton.

Graham – Graham sounds natural with your surname. (So much that I triple-checked to make sure I wasn’t missing some famous athlete by the name.) Like Grady, I think it balances both sets of siblings’ name styles.

Gregory – Okay, you mentioned The Brady Bunch. And G names for boys. So inevitably Gregory appears on this list. The name was a 1960s favorite – which tracks with the sitcom’s 1969 debut. But that was Greg Brady. I think Gregory, used in full, reads handsome and traditional.

Griffin – Griffin is closer to Carter and Easton in terms of popularity. It’s very much a twenty-first century name. But it feels closer to Abel and Felicity, I think, because of the considerable history behind Griffin, including the mythological half-lion/half-eagle.

Overall, my picks are probably Genevieve and Griffin, but I’m so curious to hear what others have to say.

Readers, over to you: what would you name a sibling for Abel, Carter, Easton, and Felicity, starting with the letter G? 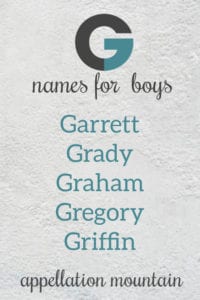 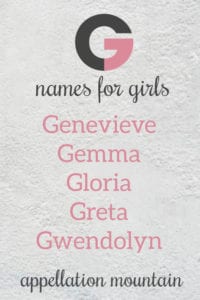