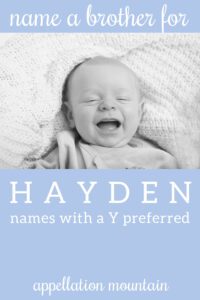 I’m Kirstyn. My husband is Dylan, and our son is Hayden.

Our second son is due in August. My favorite name is Boden and Dylan likes it, too.

But this baby would be the only one of us without a Y in his name, something that more than one of our family/friends have pointed out. I like the way Boyden looks, but everybody seems to say it BOY-den or BOYD-en, which isn’t right.

Is there any way to spell Boden with a Y that works?

The hard part first: Boyden is a non-starter.

Changing up a spelling is fine. I imagine you might introduce yourself as “Kirstyn, K-I-R-S-T-Y-N” in some situations. But looking at Kirstyn, I immediately know how to pronounce it. It’s different, but it’s still phonetically transparent. And swapping out an “i” or “e” for a “y” is common.

Dylan and Hayden are, of course, the dominant spellings of those two names.

To return to the K-I-R-S-T-Y-N point. Bodyn with a Y seems like an option. We’re used to seeing Jordyn, Londyn, and so on.

But it doesn’t seem quite as natural to me as some other spellings.

Still, it absolutely satisfies your goal: it’s the name you prefer, with the family Y.

Question time: do you imagine that this child completes your family?

None of us has a crystal ball, but it’s worth considering.

While you – and your close family and friends – notice the Y immediately, that doesn’t mean you have to continue to give all your children names with a Y embedded.

Imagine that you’re welcoming baby #3 and it’s a girl. Is there a Y name you love?

Or you’re now the parents of Hayden, Bodyn, and Madilyn … and you’re trying to find a name for your fourth child, another boy, that absolutely has to have a Y in it now.

If it’s feeling forced, and you imagine you’ll continue to grow your family, then this might be the time to drop the Ys entirely.

As kids become more independent – which happens fast – I suspect it would be less and less of an issue. Or, think about it this way: do you remember the names of your childhood friends’ parents? I know a handful, mostly because they were neighbors who socialized with my parents.

It’s a little more noticeable with siblings, but only a little. After high school, we tend to live independent lives. I know, vaguely, if my friends have siblings, and I’ve met a few here and there. But after those intense years of little kid-dom, when we’re working our way through the same elementary school and Saturday soccer league, it’s easy to not know.

If you want to keep the Ys and Bodyn ruins it for you, maybe there’s another Y name?

Brady, Grady, and Grayson all came to mind. But maybe they’re too close to Hayden?

A little bit of that long A sound, as in Hayden. But with a different ending, to make the boys’ names distinct.

Poetic Byron has a certain romantic vibe. But it’s also a very current-sounding name, and gives all four of you a name ending with N.

Another surname name with a naturally occurring Y.

As brief and high-energy as Finn.

Is putting the Y at the end cheating? Huxley sounds like a brother for Hayden, but gives you a different kind of pattern to consider. Would all of your children have H names?

An Irish surname with tremendous appeal.

Another surname name, sharing the ending sound of Huxley and Rooney, but putting the Y in the middle.

I like Boden so much as a brother name for Hayden! I think I’d use it as-is, and maybe focus on a Y-centric middle name instead – possibly a boy name starting with Y that would give him that middle initial, even? Boden Yates, maybe? Boden Yardley? Boden Yarrow …

Because if you liked Bodyn, well … you wouldn’t be raising the question, would you?

I think it’s fine to break the Y pattern. After all, you’re still all two-syllable names ending with N!

But if keeping the Y is important, I’d focus on finding another name, like Dylan and Hayden, where it seems more natural. Flynn would be my favorite, but you have plenty of good choices!

Readers, what would you name Hayden’s brother?