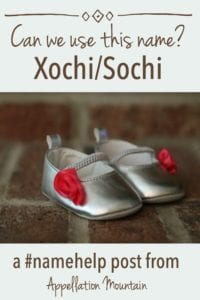 My husband and I are pursuing adoption. We heard a name years ago that we love: Sochi, or maybe Xochi or Xochitl.

If we adopt a daughter with the appropriate cultural heritage, should we use the name?

Xochitl is pretty much off the table for pronunciation/phonetic reasons.

My concern with Sochi: does changing the spelling take away from honoring Aztec heritage?

Would you use Sochi even if a baby isn’t Hispanic being that it’s a name we both adore?

Thanks for your thoughts.

Thanks for writing in! This feels like one of those questions-wrapped-in-questions, because there’s a lot to consider.

Let’s start with a little bit about the name itself.

As you know, Xochitl comes from Nahuatl, the languages spoken by the people historically called the Aztecs. The name translates to flower. The languages remain widely spoken in Mexico, so no surprise that Nahua names filter into use among Spanish-speakers.

Short form Xochi sounds pretty much exactly like Sochi to my ear, but a caveat: native speakers may differentiate between the two sounds in a way that I’ve missed.

Despite sharing a sound, the Russian city on the Black Sea comes from completely different roots. The city takes its name from the Sochi River – but I’m hitting a dead end trying to decipher the river’s name. It’s been a popular resort area since the early twentieth century, and some travel sites claim that it means “place by the sea.” But that might just be convenient folk etymology.

Either way, it’s a nature name – a river or a flower, depending on which continent you check.

Baby name data for Russia proves elusive, but I’ve never seen Sochi listed as a given name. So while Sochi might seem slightly more appropriate for a child born in Russia, it’s not quite like choosing Anastasia or Alexandra, a name in steady use.

Xochi and Xochitl, on the other hand, are used in Mexico. That means we should see some American-born girls by the name. Sure enough, in 2016, 82 Xochitls were recorded, along with six Xochis.

Fewer than five boys or girls were named Sochi last year. The only year Sochi made a dent in US naming records was 2014. Ten boys were given the name in 2014 – the same year the Olympic winter games took place in the Russian city.

Overall, I’m not sure if Sochi would be perceived as especially Latina – and perhaps not even specifically Russian. Xochi, on the other hand, does strike me as more of a heritage choice. I’d say that’s true even if your daughter’s background is Puerto Rican or Honduran or anything Latina, but not Mexican – though perhaps that also weakens the connection.

Naming during the adoption process carries its own considerations. Birth parents do sometimes make requests; if the child is older, changing her birth name may be less desirable. Every family and every set of circumstances varies.

Another complication: I imagine you may not know full details of your child’s family in every scenario. I understand why you might change your name choice to reflect your child’s background, but it might not be as straightforward as we’re assuming at this point.

Still, a heritage name might be a gift, one that helps your daughter understand and explain her family story. If your daughter’s birth mother is of Mexican descent, Xochi feels like a reasonable pick, one intended in good faith to connect her to her past in a meaningful way.

And yet it sounds like your first choice is Sochi. I can’t argue that Sochi counts as an authentically Mexican name. Instead, I think you need to evaluate it as a truly unusual name. And that’s a very different set of questions.

Sochi/Xochi: The Challenges of Unusual Names

I’m an advocate for unusual names, especially when there’s a meaning behind them. But there are downsides to these choices. And it’s possible to go too far.

But I generally think most unusual names work, Sochi included. While it belongs with the rarest of names, Sochi is easy to spell and pronounce, and passes the majority of my other Crazy Baby Names tests, too. Since you can’t know your child’s wishes, I’d ask yourself a few questions:

Sochi/Xochi: Should you use this unusual name?

If you feel confident that you can use an unusual name comfortably, Sochi has some appeal.

It feels like a class of rising modern names with international appeal. Think of Zuri. Place names continue to catch on, too. And I can imagine how you might explain curious questions. “We loved the name, and it sounds like a traditional Mexican girl’s name, so that made it feel like the right choice.”

Let’s have a poll for this one, though, because I’m not sure how others will perceive it.

Would you consider Sochi? Does it feel like a heritage choice to you?