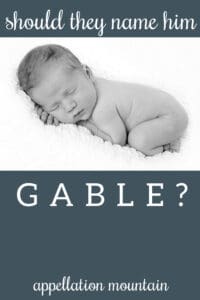 We are expecting our first boy this fall!

We both have fallen in love with the name Gable.

My husband is a builder/designer, and he loves the architectural reference.

We also both love alliterative names, and our surname is Gr33n, just like the color.

Then one day, out of the blue, my husband asked, “What about Anne of Green Gables?” It took me a while to realize what the problem was. But then I realized that both Gable(s) and our surname are in the book’s title, and it is noticeable if our son’s name would be written out as Gr33n, Gable.

Do you think this is a problem?

My initial reaction was that it’s not a big deal, because I love the Anne series and it’s certainly not a negative connotation. (One of my favorite girl names for years has been Avonlea, so I certainly am an Anne fan!) But I feel like I’m too close to the situation to really discern if it’s an issue or not.

We don’t seem to have any other boy’s name that we both agree on. We do like Garrett and Gareth, but I don’t get butterflies in my stomach like I do with Gable!

But my heart needs to know if I should close the door on Gable and move on. I think we can both commit to finding a new name we love if we know we have to let go of Gable.

I’d love some help on this issue! Thank you so much to you and your fabulous readers!

First, congratulations on your son!

And second, oh I am right there with you. Gable is a great name. It’s similar to Gabriel and Caleb and lots of familiar, Top 100 favorites. But it’s distinctive and different, too. There’s the architecture appeal, but there’s also Hollywood legend Clark Gable, which makes it rather dashing.

But would I want to be named Gable with a last name so forever wedded to Anne of?

Let’s walk through this:

Gable Gr33n immediately sounds familiar to me … but my brain doesn’t skip to Anne of Green Gables. Maybe that’s because I never went through a big Anne fan phase. That probably puts me in the minority for readers here, but I suspect that’s not terribly uncommon in the wider world.

Even if it were my first thought, it wouldn’t be a negative one. Right? It’s not the kind of thing that could bother anybody. It’s positive to nearly anyone who makes the connection. Possibly neutral. But it’s not like the name evokes a controversial celebrity.

How often are we really listed Last, First? I had to really think about this. Because it does happen. I’ve seen my kids’ names written that way on report cards and sports team rosters. And yet, I wonder if it’s actually a little old-fashioned? As databases have become far, far more sophisticated, I feel like I see my kids’ names as First Last nearly all of the time. And I’ve noticed that more and more places are quite sensitive to listing our names as we wish them to appear.

Ultimately, I think the question comes down to this: does the appeal of the name Gable outweigh nay potential friction with your surname?

My answer is a resounding YES.

It has deep personal meaning for your family. It meets your criteria for a strong name for your child.

But, but, but … I do think you need to really consider how you’ll react to others’ reactions.

Some of these cautions about truly unusual names apply, even though I would describe Gable as closer to the mainstream. How will you react when others ask about his name? Or point out the Anne reference?

When I gave my daughter an unusual and complicated name, I knew that talking about it would delight me. That daughter is growing up, and she’s more introverted than I am. She’s not quite as thrilled to spell and explain her unusual name … but she’s heard me do it for so long, that it’s second nature. In so many things, kids take their cues from us.

In other words, if you shrug off Anne references, your son probably will, too.

One other factor: I’m 99% certain that my school-aged son would respond “Who?” if I asked him about Anne of Green Gables. My daughter would know all about Anne … but her go-to reference is Anne with an E, thanks to Netflix. I’m not sure if this reflects my household alone, or if it’s the reality of SO many competing stories to claim our children’s attention? But it’s possible that it will be parents who make the connection, rather than his peers.

Let’s end with a poll, and readers, tell us – do you think Gable Gr33n would be problematic?