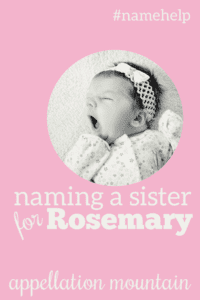 We have a three year-old daughter named Rosemary, and our second daughter is due in November.

It took us weeks to find Rosemary’s name. It’s a little longer, but we don’t shorten it, and so far, no one else calls her Rosie or anything like that, either.

We like that it’s classic, but not exactly in the Elizabeth/Katherine way. The fact that it’s longer appeals to both of us, as our last name is short. And we like that people know it, but you don’t hear it everywhere. I wouldn’t go so far as to call them rules, but out of all the names on our original long list, it’s really the only one I can imagine using for a real-life child. (At least of ours.)

We’ve considered and rejected Scarlett, Annabelle, Josephine (because I can’t stand the nickname Josie), Eleanor (bad personal memory for my wife, plus I hear it a lot on kids), Samantha (my grandmother’s dog), Marianne/Mariana (because we already have Rosemary), and too many more to list.

Lately, it feels like we can think of a reason to rule out almost every name, and we’re running out of time.

Congratulations on your new daughter! Here’s the thing: until you named your daughter Rosemary, I’m not convinced you had rules, exactly. You had strong preferences. But my guess is that naming a daughter cemented those into rules, and now you’re struggling with all the possibilities that might sound right for your child, but strike you as off when said in conjunction with Rosemary.

I mean, you could have girls called Rosemary and Everly. Rosemary and Ann. Rosemary and Mia. But I can understand why you wouldn’t, even if Everly, Ann, and Mia are three names you like in theory.

It’s one of the reasons naming children often gets harder, not easier.

So let’s focus on names that are longer, feel traditional without being too classic, and while recognizable, don’t seem terribly common.

Annabeth – You mentioned considering, but ultimately rejecting, Annabelle. Would Annabeth be an option? There’s something substantial about Annabeth. Maybe that’s because I think of her as Athena’s daughter in the Percy Jackson series. Or maybe it’s because it’s just a little less expected than Ananbelle. While belle names can be traditional heavy-hitters – hello, Isabella of Castile – I do think they feel a little trendier than you might like.

Cordelia – This name sounds frilly, but Lear’s loyal daughter has serious backbone. It seems like many of your favorites avoid an -a ending, but then, your favorites haven’t risen to The Name. Something to love about Cordelia: it reminds me of the Latin cor, heart, as in the Spanish word corazon and the French coeur.

Genevieve – The patron saint of Paris, Genevieve is French and traditional, but sounds a little edgy, even modern. Blame it on the veev sound. And while it’s rising in use over the last few years, Genevieve has never really been trendy.

Miriam – Mariana is out with Rosemary as a sister, but how about Miriam? Strictly speaking, it’s the Hebrew form of Mary, heard in the Old Testament. But there’s a lot of space between Rosemary and Miriam. Plus, while Miriam could easily shorten to Miri or Mim, it’s not nearly as automatic as many longer names.

Penelope – Maybe Penelope is too popular. The ancient name has stepped straight out of The Odyssey and on the popularity charts, boosted by a Christina Ricci movie, a reality star, and plenty of other uses. But don’t let the Kardashians get you down. The rhythm of the name reminds me of Rosemary. And while it hovers around the US Top 25 right now, that’s not quite Olivia.

Susannah – If Penelope is more popular than you’d guess, it’s stunning how much less common Susannah is these days. Neither Susannah or Susanna appears in the current US Top 1000. And yet, it’s a great name – traditional, but not buttoned-down. There’s something sparky and vintage about Susannah. I imagine plenty of sisters have answered to some combination of Rosemary and Susannah in days gone by. And yet she’ll probably never share the name with another girl her age.

Theodora – Theodore makes the list of traditional boy names in the middle of a revival. Theo and Thea are popular, too. But somehow we’ve overlooked Theodora, and that could be a great opportunity.

Veronica – We’ve been hearing the name Veronica since the New Testament. Berenice – or Pherenike – is an even older form that dates the name to Egyptian royals in ancient days. But Veronica remains just under the radar, a name we all know, but rarely share. Veronica and Rosemary are timeless – at home in the early twenty-first century, but at plenty of other times, too.

Overall, I love the symmetry of Rosemary and Annabeth. But I think my vote goes to Theodora. It has the same steely strength as Rosemary. (Full disclosure: both names are on my lists of favorites for a future daughter.) They’re both four syllable names we all recognize but don’t hear too very often – a perfect match.

Readers, what would you suggest as a sister for Rosemary? Do you think Theodora works? Or am I overlooking better possibilities? 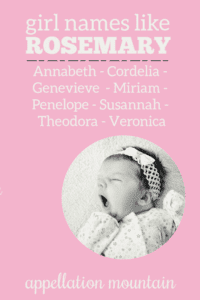