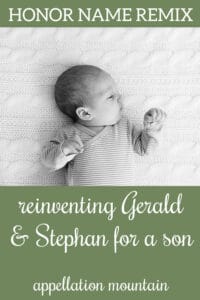 I want to name my son after two of my grandparents. Their names are Gerald and Stephan. I don’t exactly like either name, but I want him to carry both their names. Is there anyway you can help me reinvent it?

I don’t actually know if this baby will be a boy, but I already have my girl name picked out to name after my sister: Lindora Samantia.

Reinventing family names can be the best of both worlds. You honor your loved ones, but your child has a name of their very own, too.

Of course, everyone has their own personal sense of what qualifies as a reinvention, and what strays way too far from the original name to really count. Only you can decide what makes a satisfying honor name.

Just in case none of these work, you can always consider honoring a loved one without directly handing down their name.

Let’s try refreshing each name individually, and then putting them together in combinations.

Re-arrange the letters of Gerald, and Adler is one possibility, assuming you don’t mind dropping the G. It means “eagle” in German.

Alder also uses every letter, again except for the G. (I suppose it could be Aldger, but that’s a different sound.) There’s an alder tree, which puts this name in the same category as Rowan.

It’s possible to imagine Aldo as a Gerald nickname, borrowing the last syllable. But Aldo is far more current, an o-ending choice with Germanic roots. That might be perfect … or maybe a little too brief.

Gerald and Garrett sound pretty different, but Garrett started out as a surname derived from Gerald.

A Scandi name meaning “spear,” Geir comes from the same roots as Gerald. (The Germanic ger also means spear.) The one snag? Geir is pronounced with two syllables in modern Scandinavian languages, more like Guy-er. I’d be tempted to rhyme it with spear in American English.

One more ger name, this time a little easier to pronounce. The G sounds like a J, and –vase sounds like, well, vase. Comedian Ricky Gervais comes to mind. While Gervase was used in English, it softened into Jarvis over the years.

A variation of Garrett, but with a J instead of a G.

Hands down, my favorite way to reinvent any of these names is with Estevan. Esteban is the more common Spanish form, but Estevan is occasionally heard, too. It’s clearly linked to all of the Steve names, and yet it’s just a little different.

The French form of the name, and another intriguing possibility.

It depends, I suppose, on how you pronounce Stephan. But if you say it with a soft PH in the middle, then the second syllable almost sounds like Finn.

The letters are waiting, right there in StepHAN. Han brings to mind iconic Star Wars character Han Solo, but Hans is also a common form of John.

Would just respelling Stephan to Stefan make a difference? Visually, it looks a little bit updated.

If you accept that Estevan can be a Stephan honor name, then maybe just Van works, too?

I love the way that Alder uses nearly every letter of Gerald. And Estevan is such a sparky refresh for Stephan.

Maybe this strays a little too far from Gerald and Stephan, but I think it’s sleek and stylish.

Garrett might be my favorite update for Gerald, again paired with the longer middle name option.

Maybe just opting for Stefan works? If so, Stefan Jarrett seems like a good blend of the modern and the traditional.

Readers, over to you! How would you reinvent the names Gerald and Stephan?