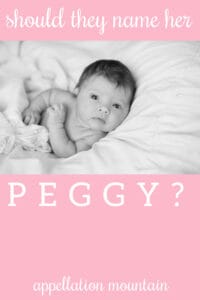 My partner and I are expecting a daughter before the end of the year. Most likely this will be our only child.

We keep coming back to one name: Peggy.

It doesn’t have any meeting or significance, though my partner does have a great-grandmother named Margaret. That’s not why we like it, though. The name just makes us both smile.

Several people close to us have suggested naming our daughter Margaret and calling her Peggy, but we’re not interested in that. First of all, neither of us really knew Peggy was a nickname for Margaret until the name came up, so I feel like we’d be in for years of explaining that we call her Peggy, not Maggie or Meg. Second, we don’t really like the sound of Margaret.

Our daughter’s middle name will be my last name, which is like Matthew-with-an-S, and her last name will sound like Albert-with-an-H.

While naming your daughter Margaret might give you options, it also potentially causes a hassle.

It goes a little like this: Margaret shortened to Meg, which became Peg, and then Peggy, courtesy of the same rhyming magic that transformed Robert to Bob and William to Bill.

People know … but you’re right. At the same time, they don’t know that Peggy comes from Margaret, and I agree – you’d probably find yourself explaining that she’s Peggy, not Maggie.

So we agree, you’re going to skip the formal name.

Because you’re right … it can’t be both. But somehow it is.

That’s because we use terms like “too cute” and “old lady” as pejoratives. They’re shorthand for “you shouldn’t use that name because it’s not a good name because I say so.”

If someone said that about Sadie or Hazel, you’d shrug and say, “But Sadie/Hazel ranks in the current US Top 100, so you’re wrong. It’s a completely reasonable name for a girl born now, and the numbers prove it.”

The trick is that Peggy is stuck in style limbo.

It ranked in the US Top 100 from 1927 through 1962 as an independent name. Layer in popularity of Margaret in same era, plus a healthy number of girls named Mary Margaret, and Peggy? There were plenty of Peggys in the US in the middle of the twentieth century.

The name’s image seems to be shifting. During the late 1980s and 90s, Married With Children’s Peg Bundy wasn’t much of a namesake, but three decades later, Mad Men’s fabulous Peggy Olson made many of us reconsider the name. (Though, yes, the latter is a Margaret.)

PEGGY: BY the NUMBERS

It’s impossible to know how many Margarets answer to Peggy.

And yet, Peggy has lots of advantages.

But that’s only if you are so inclined.

Because I think Peggy is a great name for your daughter.

Readers, over to you – what have I missed? Would you name a daughter Peggy?