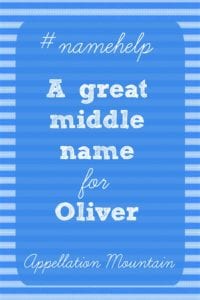 Name Help is a series at Appellation Mountain. We discuss readers’ name questions. We’re relying on thoughtful comments from the community to help expectant parents narrow down their name decisions. Thank you in advance for sharing your insight!

Hilary writes:
We’re expecting our second son in one week and are still struggling with a name. His brother’s name is Henry Otto (both family names). Our last name is short, one syllable, and starts with a K.

We are considering the name Oliver – calling him Ollie – for a first name, but don’t have a middle name.
Our choices are:
Thanks!
Please read on for my response, and leave your helpful suggestions in the comments.
Dear Hilary –
Congratulations on your new son!
Let’s address a few of your questions first.
There’s no rule that says a short surname requires a longer first or middle. In fact, we can all think of examples like Brad Pitt, Frank Lloyd Wright, and Max Planck. Two short names together can be quite memorable.
And yet I’m not sure if these are the short names I’d shortlist. Rex repeats the meaning of your surname. And Fox, when combined with your surname, almost sounds like a unfortunate verb. I don’t think these are deal-breakers. I’m forever wary of “x sounds like y” reasons for dropping a possibility. Still, these don’t seem to be your favorites, so maybe it’s just fine to move on.
Likewise, nothing says that a long name is problematic. I quite like Oliver Augustus. Is it a lot of sound? Sure. But we routinely meet boys with names like Cameron Alexander and Elliot Sebastian – same syllable count, or even more.
Let’s look at the rest of your options, and consider a few related ideas, too:
Hudson – If Hudson were your very favorite name, I’d tell you to disregard Oliver Hudson. Yes, he’s a successful actor from a family of successful actors, suggesting he’ll stay in the spotlight. But it’s not quite like being Humphrey Bogart K*** or Robert DeNiro K***.  Both Oliver and Hudson are common given names for boys in 2018, and Oliver Hudson isn’t so famous that we all recognize his name immediately. That kind of low-grade famous is usually not problematic over the course of a child’s life – but, of course, you don’t know for certain if Oliver Hudson is a future Oscar winner – or if he’ll become embroiled in a scandal. So if it’s not your absolute favorite choice, this is as good a reason to strike Hudson from your list as any.
Hayes – I really like Hayes with Oliver, and I like the flow of Oliver Hayes K***.
Fritz – I’d put Fritz just behind Hayes in terms of overall appeal.
Elijah – You’d mentioned a worry about repeating ‘L’ sounds. It’s tricky, because that often comes down to personal preference. My sense is that names with subtle repeating sounds are memorable and feel quite stylish. I’d take Annabelle Louise over Annabelle Marie, and Timothy Martin over Timothy John. So Oliver Elijah works just fine to my ear. The other thing that stands out: if your older son has two family names, it might be nice for Oliver to have at least one.
Eli – If you’re still not sold on Oliver Elijah, would you consider Oliver Eli? Strictly speaking, Eli and Elijah are not directly related. But the sounds are there. For better and for worse, you still have the repeating ‘l’ sound. I very much like the idea of the vowel ending of Eli, too – Oliver Eli mirrors Henry Otto in that sense.
August – But maybe this is the most straightforward solution. If you’re concerned that Oliver Augustus is too long, how about Oliver August? Oliver August K*** sounds just right together, and gives your second son a family name, too.
So my vote goes to Oliver August or Oliver Eli, but I’m curious to hear what others will think. Is Augustus too long? Are single-syllable middles too short with a single-syllable surname?
Readers, what would you suggest for Oliver MiddleName K***?