My husband and I are expecting our first child in a few months. We are planning on keeping the gender a surprise.

I have loved, studied, and obsessed over names for as long as I can remember. My husband only likes names he is familiar with and don’t “sound made up.” We both like classic names, and I would say my ultimate name goal would be described as a “fit-in, stand-out” name.

I would like to honor my grandparents with our children’s middle names. Their names are Charles, Patricia, and Frank. My grandmother’s middle name is Ann so I would also be willing to use a variation of Ann to honor her.

If this is a boy, his middle name will definitely be Frank, as that is also my mother-in-law’s maiden name.

Every name I love for a minute, I find an issue – no nicknames, too unusual, too common or doesn’t age well – or my husband doesn’t agree. I believe Lucy would be perfect for us but our last name causes an issue. I try to draw inspiration from my nieces names, which are Valerie, Delilah, Amelia, Bria, and Vienna.

Names that we’ve already rejected include:

I’m so overwhelmed with names at this point.

Read on for my suggestions, and please add your thoughtful comments!

Congratulations on your baby-on-the-way! You’ve identified another baby naming syndrome – when we love names, glorious names, it can feel impossible to choose just one name for an actual human being, right?

The good news? You know what you want in a name, and it seems like you and your husband aren’t miles apart style-wise, which is often a big part of the challenge.

You’ve rejected Charlotte, Sophia, and Olivia for popularity, but many of the other names on your lists are reasonably familiar. Is it fair to say that Top Ten names are out, but you’re open to something in the US Top 100? It seems like less common names – Cambria or Roland, say – definitely wouldn’t appeal to your husband no matter their history, and might not be your cup of tea, either.

So we’re looking for a name that is:

Before we go forward, a brief public service announcement about popular names: if you find yourself rejecting your favorite name because of its rank on a chart, it might be a good idea to stop and reconsider your hesitations. There’s something to be said for choosing the name that you love – even if lots of other people know how great it is, too! 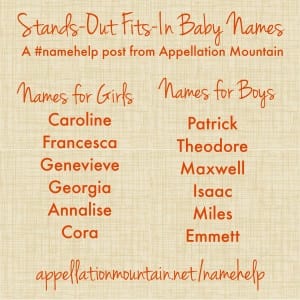 Patrick – Patricia is dated, and Pat feels decidedly middle-aged. But Patrick – used in full, no nickname, has potential. It’s been hovering around the #150 mark in the US for the last few years, which seems like it could definitely be your sweet spot in terms of popularity. And it’s traditional without being overused. The only drawback? There’s really no other go-to nickname besides Pat. (Rick? Trick? Maybe not.)

Theodore – Names like Charlotte and Sophia always make me think of Theodore. It’s a storied classic, with a long history of use. At #126 in the US, it’s more popular than Patrick, but still out of the super-popular camp. For comparison, Oliver ranked #32 in 2014. When it comes to nicknames, Theodore really shines. There’s old school Ted, adorable Teddy, and the spirited Theo. Of course, you could put just Theo on the birth certificate, too. Another name in this category? Leo, along with Leon, Leonard, Leonardo, and my personal favorite, Lionel.

Maxwell – Maxwell feels like a logical member of the Oliver-Julian-Gabriel club. Just as Gabriel shortens to Gabe, Maxwell can be just Max. At #107, Maxwell is fairly popular, and there are a lot of Max- names in use. But I feel like it’s such a good fit for your overall style, that Maxwell bears a mention.

Isaac – Isaac is about as popular as Gabriel and Oliver, so I’m not sure if that’s an issue. And I almost didn’t suggest Isaac. Except the nicknames are so great – Ike and Zac. It’s Biblical like Gabriel, but has plenty of other associations, from Sir Isaac Newton to musician Isaac Hayes. Here’s the funny thing about Isaac: nothing really sounds like Isaac. So even as it becomes more popular – we have two in our extended family! – it still doesn’t sound very common, does it?

Miles – Something keeps whispering to me that Miles could be the name for you. Again, at #108 it’s in that familiar-but-not-overused space. It feels like a brother for Oliver, which makes me think it might appeal. And, like Isaac, it’s versatile, bringing to mind musicians and Pilgrims alike. Nicknames aren’t plentiful, but you could use Milo.

Emmett – Let’s call Emmett traditionalish. It’s a surname rather than a conventional given name, but it has a history of use in the first spot. And while it’s not easy to nickname, there’s something friendly and straightforward about Emmett that reminds me of the other names on your list. I love Emmett Charles together, but Emmett Frank works, too.

Caroline – There’s an obvious alternative to Charlotte: Caroline! It’s also related to Charles, and while it’s popular, it isn’t at the dizzying heights that Charlotte seems destined to reach. Caroline is also nickname-friendly – Carrie, Carly, Charlie – though I’ve known plenty of Carolines who were nickname-free. Caroline ranked #58 in 2014, so well below the Sophia-Charlotte threshold, through still on the popular side.

Francesca – There are so many great Francis names! Since Frank is a significant name in your family, it seems like a Frank- name might be the perfect first name, choice. Francesca is the least common name on this list, but it feels familiar. Frances is a possibility, too, but while Frances feels gentle, Francesca is energetic – which reminds me of your nieces’ names, especially Bria.

Genevieve – Charlotte hits that feminine-but-tailored sweet spot exactly. And Olivia’s ‘v’ sound is irresistible. Put them together, and you’ll have Genevieve. Very nickname-able, from Gen to Vivi to Eve. At #210, I’d say Genevieve is a great stands-out/fits-in choice.

Georgia – Amelia always makes me think of Georgia. A few points in favor of this name: nicknames galore! At #243, it’s a great stands-out/fits-in choice. And it has a certain spirit that reminds me of your nieces’ names. One drawback: it could sound the tiniest bit like a phrase with your gemstone surname. But Georgia has such a long history of use as a given name that I think it’s a minor consideration. Georgia Annalie, maybe?

Annalise – I was tempted to suggest Annabelle, but I think it’s a little too popular. And then there’s Annevieve, but maybe that’s just too obscure? I settled on Annalise as the middle possibility. In Germany, it’s Anneliese – pronounced like Annalisa – and a smoosh of Ann and Elizabeth. In the US, it’s a novelty, but one that’s heard more and more often.

Cora – I considered suggesting Claire and Clara before landing on Cora. Cora is a vintage name that’s risen quickly – thank you, Downton Abbey – but still hits that stands-out/fits-in mark. It’s a traditional name, but not one that we’ve heard everywhere in recent years. Cora Patricia might be a great combination!

Readers, I’d love to hear your suggestions for stands-out/fits-in names that have a more traditional feel to them!