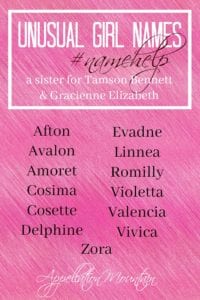 Update: They settled on Helena if it was a girl, but baby #3 was a boy. Welcome to the world, Easton Charles!

We recently found out I am pregnant with #3. Surprise!

I have a 6 year old boy named Tamson Bennett and a 4 year old girl named Gracienne Elizabeth. I already have a boys name, but nothing for the girl and I do not seem to like anything, except Iris, but our last name starts with an ‘S’ and is one syllable, and rhymes with Elle, so that name is out. (Heart broken).

My husband doesn’t want to use anything typical, so my love of Esme and Eva are out (as is the top 400). I like Reeva, but I’m not over the top. It’s getting stressful and everything kind of feels wrong.

I would GREATLY appreciate any help. Thank you!!!

Oh – the search for a great name that no one else has discovered yet! In theory, it’s fun. But when you’re looking for a name that is both underused and just right for your child? That can be a challenge.

I’m going to avoid the entire US Top 1000, even though I think Gracienne and Reeva both feel reasonably mainstream. And yet, I would add this: Iris ranks in the girls’ Top 200. If you fall in love with a name that’s just a little bit more popular than you’d prefer? Try not to rule it out right away.

Afton – I wonder if you’d prefer something slightly more tailored? Afton comes from the name of a river, immortalized in a Robert Burns poem, sometimes set to music. But maybe it’s a little close to your son’s name? Another similar possibility would be Avalon, as in the paradise from Arthurian legend – and the Roxy Music album.

Amoret – Esme means beloved, and so I went looking for more names with similar roots. A few – like Elska and Carys – don’t work with your surname. But Cordelia, Davina, and Evolet all do, as does Amoret. It’s probably the most distinctive of the bunch, so I’m adding it to this list of suggestions. Edmund Spenser invented Amoret for his poem The Faerie Queene, so it’s not unknown. I’ve also seen it spelled Amorette.

Cosima – You’re looking at short names, but Gracienne is fairly elaborate. Would something like Cosima appeal? I think it could pose some pronunciation challenges, at least in the US. But it’s an appealing rarity, with a great meaning: order, as in cosmos. If that’s close, but not quite, the literary Cosette might be another possibility. There’s no question about pronunciation, and it has the same tailored, slightly French feel of Gracienne.

Delphine – Speaking of slightly French and tailored, I think Delphine would make a great sister name for Gracienne.

Evadne – Since you like Eva, but it’s too popular to be The Name, I wonder if you’d consider a longer Eva- choice? Elaborations like Evalina work, of course, but I wonder what you’d think of Evadne? It’s a name from Greek myth, and it fits right in with Everly and Evelyn, plus that ‘e’ ending brings to mind Penelope and Zoe.

Linnea – Maybe it’s because Iris is a flower name. Or maybe it’s because Gracienne combines familiar feminine sounds in unexpected ways. Linnea – another name for the twinflower – came to mind immediately. It sounds like a girls’ name, and I can think of plenty of appealing uses. And yet, Linnea hasn’t appeared in the US Top 1000 since the 1950s. (And even then, it never reached higher than the 800s.)

Romilly – What would you think of Romilly? It’s a slightly different direction – a tailored surname name, rather than a more traditional first. But it sounds like a girl’s name circa 2018, and while it’s rare, it offers a clear pronunciation.

Violetta – One of the strengths of Gracienne is how it’s just ever-so-slightly different from the chart-topping Grace. Violetta offers a spin on the very popular Violet. It also preserves the ‘v’ sound of Reeva. Of course, so do lots of other options, like Valencia and Vivica.

Zora – Since Reeva – and Esme and Eva – are on the shorter side, I wonder if you’d like Zora? It comes from a Slavic word meaning dawn, and it brings to mind writer Zora Neale Hurston. Way back in the day – into the 1930s – it appeared in the US Top 1000. But today, it’s relatively unknown.

I’m having a hard time figuring out which names make the most sense. Tamson and Gracienne are distinctive, and while they’re rare, they’re not all that different, either. That makes me think that something like Zora or Linnea might be the right direction. But I’m also wondering if you’d prefer a more tailored name, and so the consonant-endings of Delphine and Amoret speak to me, too.

But overall, if I had to choose just one, I think I’d say Evadne. It repeats some of the letters and sounds you’re drawn to, but it’s definitely different. Tamson, Gracienne, and Evadne – I do like those together.

Over to you, readers – I know you’ll have some great suggestions! What would you name a sister for Tamson Bennett and Gracienne Elizabeth?