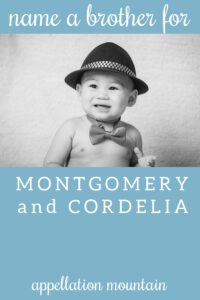 We two children, Montgomery and Cordelia.

I love that they’re names from another time, old world names that feel like they stepped out of a nineteenth century novel.

We’re expecting our third child this spring. Gender will be a surprise.

We’re pretty settled on Tabitha for a girl, but we’re all over the place for a boy.

Names we have considered:

Can you help us think of some more ideas?

Our last name sounds like James without the J.

Congratulations on baby number three! I love Tabitha with Cordelia and Montgomery.

It does sound like you’re a little stuck on boy names, doesn’t it?

Sometimes the world catches up to us, discovering our favorite names before we get a chance to use them! That sounds like that’s exactly what happened with your list here – Sebastian and Arthur have gone from undiscovered gems to everybody’s favorites.

Gregory is great, and I’ve heard it used for this generation in full. But I know what you mean about Montgomery and Gregory sounding a little repetitive together.

It strikes me that neither Montgomery or Cordelia rank in the current US Top 1000. Maybe it would help to focus on names that are similarly underused?

A BROTHER FOR MONTGOMERY AND CORDELIA

Archie is rising in use, but it’s still just #466. And Archibald is very rare. Montgomery, Cordelia, and Archibald have that stepped-out-of-a-period-drama sound for me.

Conrad is one of the great names that everyone knows, but almost no one uses. Except … maybe it’s a little close to Cordelia? Not sound-wise, exactly, but visually they look quite similar. Still, it’s worth consideration.

A handsome and traditional name, Frederick is more popular in the UK than the US. That’s also true for sweet nickname Freddie.

Horace is serious and tweedy, while cousin Horatio is spirited and high-stepping. I can make the case for either name, but I think Horatio pairs best with dashing Montgomery.

A knight from medieval legend, Percival is quite handsome, and nickname Percy makes it easy to wear.

Not so long ago, Reginald would’ve felt stuffy. But I think it’s almost time for a comeback. Or at least it’s early stages in the UK. And Reggie is darling, plus Rex is another nickname option.

Polished and understated, Wallace feels nicely understated. But Scottish hero William Wallace lends it some bravado. I think Wally could be cuddly on a baby, but I’m not sure I like it as much as Monty or Archie or Percy or lots of the other possibilities.

A BROTHER FOR MONTGOMERY + CORDELIA

I think Horatio is my favorite. Doesn’t it just sound like Montgomery’s mischievous little brother? Except the lack of a nickname could be a limiting factor. Do you just like Monty, or do you actively use it?

If you’re in the market for a name with an easy short form, then I’d give the nod to Archibald. It sounds a little dramatic, even outlandish, compared to Sebastian or even Arthur. It’s a BIG name for a baby!

Readers, what would you name a brother for Montgomery + Cordelia?