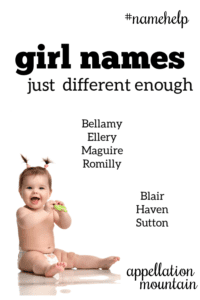 I’m a 1980s Jessica married to a Michael. Our siblings’ names are every bit as predictable: I have a twin sister Jennifer, plus an older brother named Joshua. Michael’s siblings are Ryan, Sarah, and Nicole. (Michael’s sister, Sarah, married a Michael, too, and my brother Josh married a Julie. It’s like someone just named us from a rack of personalized license plates from the year 1987.)

We’re expecting a daughter and want her name to be more timeless, and a little bit different, too.

All of our siblings are married with kids, for a total of eleven niece and nephew names we can’t consider: Gabriella, Lily, Olivia, Piper, Sophie, and Zoey, plus Caleb, Cameron, Landon, Levi, and Wyatt.

That’s okay, though, because, like I said, I think we’d like something different. The question is how different?

The only name we sort of agree on is Presley. Except neither of us is an Elvis fan. We just like the sound. And yet I feel like it’s the kind of trendy name we’re trying to avoid. All of the others are okay – but it’s not like we each have a favorite or two we’re really fighting for.

My only rule is no J names, even though I think Juniper is another name that I could love.

Congratulations on your daughter! And oh, I hear you about names that are stuck in their decade. It’s not a bad thing, necessarily. But I know about a dozen women my age named Heather, and a bunch of Allisons and Michelles, too, so much so that I refer to them by first-and-last name. “Oh, I’m going to see if Heather Smith is free to join us when we plan that lunch for Allison Jones.”

So I understand – and applaud – your attempts to find something just a little different for your daughter.

And yet, a couple of things jump out at me.

Let’s talk numbers for a minute …

So even if you name your daughter Emma, odds are that she won’t feel quite the same way that you and your husband and siblings might.

And yet, you do have some very popular names on your list.

Luna and Willow rank in the current US Top 100. Emery is just outside the current Top 100. They’re not Top Ten at all, but it’s worth noting that you’ll probably meet other children with these names – or at least your co-worker will mention her cousin’s new daughter with the same name and you’ll overhear it on a television character and … you get the idea.

Scout and Bellamy aren’t in the current US Top 1000. Arden and Ingrid are relatively uncommon. Presley is right around #200. That seems like a sweet spot, doesn’t it?

Can you name your baby Presley if you’re not an Elvis fan?

My reaction is yes, of course. If you accept that some people will ask if you’re going to Graceland. Or sing “Love Me Tender.” Or, or, or …

Most pop culture references fade. But Elvis? He’s the King. He died in 1977 – but he last scored a #1 hit in 2002. That’s the same year his music was featured in Disney’s Lilo and Stitch. There’s every reason to believe your Presley would be aware of the singer, as would her peers.

That said, over 1500 girls were named Presley in 2017. No way were all of their parents superfans. And it’s been in heavy use for a decade. My guess is that a Presley born today would experience her name as perfectly mainstream, and not especially tied to the singer because it’s relatively popular. So there are upsides when a name catches on.

You’ve probably looked at dozens of name lists, but let’s see if we can come up with a few fresh suggestions.

Ingrid feels a little different, but Scout, Arden, and Emery are solidly surname-style names. So is Presley, of course. The strength of a surname name is that it can be very rare as a given name, but instantly familiar to all.

First, how about some surnames nobody is really using, but would wear well?

Bellamy – It’s just outside of the current Top 1000, but that Belle sound makes it feel familiar.

Ellery – Emery always makes me think of Ellery. It shortens to Ellie, but the whole name feels accessible, too.

Maguire – Maguire sounds distinctive and different, but it comes with built-in nickname Maggie.

Romilly – Quite rare, but with history, and at least two easy nicknames: Milly and Romy.

Or maybe you’d like to consider something north of Emery/Presley in terms of popularity, but not quite that obscure:

Blair – As tailored as Claire, but with a preppy, unisex sensibility. Also in this category: Sloane, but it’s nearly as popular as Presley.

Haven – Okay, it’s a word name, not a surname. But it shares the same tailored style.

But I think the right name might already be on your list: Presley. If you can overlook the Elvis connection, that is.

Readers, over to to you. Would you use the name Presley?