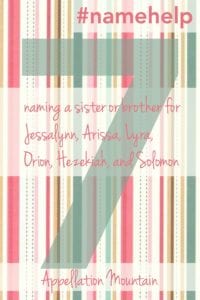 We are expecting baby #8 and I can’t seem to find names that I love. I like the name, but don’t love it, if that makes sense. Choosing the last two names was very difficult. I don’t like names that are super popular, and I love names that are rare and totally unexpected. But maybe not too far out there.

The name doesn’t need to be Biblical.

For a girl, I’d like to use the middle name Grace to honor my mom, Nancy.

For a boy, we can’t use Kade, Gavin, Isaac, or Isaiah.

I would prefer a different fist letter for the first name so no A, H, J, L, O, or S.

Please read on for my response, and leave your helpful suggestions in the comments. NOTE: Oh no! Somehow, I omitted one of Kindra’s daughters names from the first version of this post! With apologies to Kindra and her family, she’s also mom to Melina Faith. I’ve added her name to the list above.

When you name children over many years, it’s almost inevitable that your style evolves. Jessalynn feels modern, invented, and breezy. Solomon strikes me as far more traditional and serious. Names like Lyra and Orion – your middle kids – fall somewhere in between.

It makes all the sense in the world, right? Unlike fictional siblings, named by one author over the course of a few months, real life gives us twists and turns as we build our family.

From the outside, though, two things leap out at me.

First, this might be part of the reason you’re having such a tough time choosing a name! You’ve used some of your favorites, and don’t have a clear pattern for choosing again.

Second, it’s tempting to suggest more mythological names – like Orion – or more Biblical ones – like Solomon and Hezekiah. But it seems like that might not be the best direction. After all, lists of both kinds of names abound on the internet. So if looking at such a list solved your problem, well, there would be no point in #namehelp.

The question, then, is what falls between Orion and Solomon? Or Lyra and Jessalynn?

Atlas – Atlas comes from myth, just like Orion. But it also suggests maps and the wider world. I think it’s so perfect that I’m breaking your rules and putting just this one A name on the list!

Caspian – Caspian brings to mind the sea between Europe and Asia, as well as CS Lewis’ fictional prince. It feels literary and imaginative. Rhythm-wise, it fits with those longer Old Testament you’ve chosen for boys, but style-wise, I’d put it closer to Orion.

Corbin – Corbin means raven. Once, it was likely given as a nickname for someone with dark hair. Today, the most famous Corbins include blonde actor Corbin Bernsen and rising star Corbin Bleu.

Phoenix – You mentioned that the name doesn’t have to be Biblical. But I wonder if it helps to find something meaningful? The phoenix rises from its ashes, serving as a powerful symbol of renewal – both in the ancient world, and to Christians in medieval Europe, too.

River – Like Phoenix, I’d call River a modern meaningful. It seems like a good match for your older children’s names, even though the style is slightly different.

Taran – Taran doesn’t sound like a brother for very Biblical names like Hezekiah, but I think it works with the family overall. It has roots in Welsh and Sanskrit, and possibly a few other languages, too. Lloyd Alexander gave us a heroic Taran in his young adult fantasy-adventures novels The Chronicles of Prydain.

Carys – Carys comes from Welsh, where it means love. Welsh speakers invented this one within the last century or so. It’s distinctive and different compared to all of your older kids’ names, but that might be a good thing.

Daphne – In terms of popularity, Daphne comes in a little higher than your other daughters’ names. And yet, I think it’s a style match. Like Orion, Daphne comes from myth. Like Jessalynn, Arissa, and Lyra, it feels feminine but not expected.

Davina – If you almost-kinda like Carys, but find the sound too tailored, perhaps Davina would appeal? It’s a feminine form of David, rare in the US – though it recently entered the Top 1000. Like Carys (and David), it means beloved. The interesting thing here? David comes from the Old Testament, so Davina bridges the Hezekiah/Solomon style with some of the other sounds you love.

Evolet – First I wanted to suggest Scarlett or Violet. Then I thought about Juliet and Amoret. Those -et/ette endings feel feminine, but would introduce a different sound into your mix. The challenge is finding one that feels feminine, romantic, and yet avoids repeating initials. And I suspect that you know at least one Scarlett or Violet, so I dropped them from the list, too. That’s how I landed on Evolet, a rare Ev- name that may be an anagram of sorts for “the love.”

Mariah – This might be too close to the sounds of Hezekiah and Lyra, but I really like Mariah for you. It’s not an Old Testament name exactly – just another cousin to Mary and Maria, but while those classic names might feel out-of-place with your more eclectic style, Mariah fits right in. But do say it five times fast and see if it blurs too much with sibling names. If that’s the case, I wonder if you’d like Maris instead?

Zara – There’s something poetic about the youngest child in a larger family having a Z name. (The challenge, of course, is that she might not be your last!) Zara claims multiple meanings that make it feel global and modern, but still rooted – which describes many of your older kids’ names, too. Zora might be another option.

Overall, Caspian and Davina are my favorites. They’re a little different, style-wise, than your older children’s names, but in a good way.

I know readers will have some amazing suggestions, so I’ll open this up for comments.

What would you name a sister or brother for Jessalynn, Arissa, Lyra, Melina, Orion, Hezekiah, and Solomon without repeating an initial?