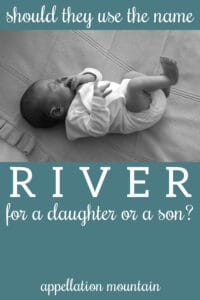 Our first baby is due early in 2023, and we think we might have the perfect name already: River.

My mom’s maiden name was Rivers. She’s the last in her family, so the name ends with her. When I was born, my mom really wanted to use Rivers for my middle name, but my dad thought it was too weird, so I’m Meredith Lynn instead.

(When I learned this as a teenager, I was bummed, because how cool would Rivers have been as a middle name?!)

Naming my child River feels like a great way to honor my mom (and grandparents), and also a way to use the name that could’ve been mine.

My husband is on board, but he thinks it’s more of a girl’s name. I’m fine naming a girl River, but I’d like to use the name if it’s a boy, too. We have middle names in mind that are obviously male/female, if that makes a difference.

Readers, please read on for my response, and leave your thoughtful suggestions in the comments.

Congratulations on your first child!

First, this is an amazing way to honor your mom. Both because it directly draws from her family name and because it picks up on her desire to hand the name down to you all those years ago.

Second – and look, this is most of the discussion, right? – there’s really no way to explain why some names strike us as a “boy” or “girl” names.

English has no hard-and-fast rules. Luca and Leo are usually boys, while Luna and Cleo are girls.

The only way to know is to look at usage. And that, of course, is subject to change over time.

So let’s talk about River, the name and the numbers.

Your dad played it safe when you were born, and, indeed, no one was named River(s) much before the 2000s. (Though, yes – I’d also be crushed at missing out on such a cool and meaningful name!)

But today? It’s common for boys and girls.

An additional 1,862 girls received the name. That translates to #151 for the girls.

Looking at usage over time can be helpful, too. Why? Because if a name has been given to more boys over a decade or 25 years, well … you’ll meet more boys with that name. And that will probably cement the name as masculine in more people’s minds.

SO … RIVER IS KINDA MORE OF A BOYS’ NAME?

At least, the numbers suggest that River is more likely to be a boy, especially if that River is, say, middle school-aged or older.

But things change all the time, and River feels more like an acceptably unisex name now.

Some of it depends on your point of reference. If River Phoenix is your first thought, it leans boy. But if you’re a sci fi fan, well … River Song and River Tam make this feminine.

And, of course, since River is a named your husband associates with you and your mom, that might make it read feminine to him.

REALLY, RIVER WORKS FOR A DAUGHTER OR A SON

But really, I’m siding with you.

River is an honor name for you, one that works for a son or a daughter.

If anything, the numbers favor River as a boy’s name.

It seems like too good a chance to pass up!

IF THIS DOESN’T CONVINCE HIM …

Of course, there’s another option. If your husband just can’t get on board with the idea of a boy named River, you might consider the middle name Rivers.

It’s not quite as direct an honor, but it does close the loop on your middle-name-that-got-away.

Readers, over to you – what would you say to this couple about using River for their firstborn’s name?