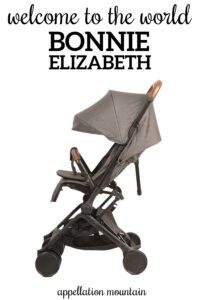 They went with Bonnie! Sarah writes: Sorry it took so long for the update, but wanted to let you know that all of the comments reassured us. Bonnie is beautiful and I can’t imagine her with another name! People have brought up Bonnie and Clyde and My Bonnie Lies Over the Ocean and Toy Story … but no one (including my sister!) has mentioned Gone With the Wind. Thanks so much to everyone who took the time to comment!

My partner and I are expecting our first child in August. We were pretty sure we’d name her Bonnie. It’s not a family name or anything like that. It’s just the name we keep coming back to.

But I mentioned it to my sister, who is really my best friend, and she asked if I was worried people would think it was racist.

She told me that Bonnie is the daughter in Gone With the Wind and that she’s named after the Confederate flag.

Now I’m not sure what to do. We would never even consider a name insulting or demeaning to anyone.

But is this really for real? I’ve been trying to ask friends without revealing that it’s our favorite name, but it’s impossible.

Our second-favorite name is Daisy, but good friends just named their baby Daisy, and we hope that we’ll see a lot of them, which that’s possible again.

It’s one thing to hear “I don’t care for that name.” But it’s something completely different to hear “that name might indicate that you are a horrible human being.”

It sounds like your sister was speaking out of love and concern.

And yet … I have a hard time seeing her point. Let’s unpack this.

Yes, Bonnie is Scarlett and Rhett’s daughter in Gone With the Wind. Her name is explained in both the book and the movie. Scarlett insists on the rather grand formal name Eugenia Victoria. But Melanie – Scarlett’s sister-in-law – notes that the baby’s eyes are blue.

As blue as the bonnie blue flag.

The nickname immediately sticks, and she’s Bonnie for the rest of the movie.

So. Yeah. Not great.

Point of fact: I’ve known this bit of trivia forever, but until I read your question I didn’t think about it. The flag I think of as the symbol of the Confederacy is mostly red, right? Turns out there was a specific flag associated with the Confederacy known as the Bonnie Blue, as well as a song.

Plausibly, children might have been named Bonnie as a nod to the Confederacy, just as some were named after generals and commanding officers.

The book was published in 1936, and the movie followed in 1939. They’re both nearly a century old, and showing their age – badly.

That also means that relatively few people in their 30s are familiar with the story. I’d wager that even fewer can name Scarlett and Rhett’s daughter.

And only a tiny handful can tell you why she was named Bonnie.

BONNIE PREDATED GWTW … BY A LOT

Bonnie is a Scottish word meaning pretty, adopted as a nickname and then given name.

It predated the book and movie.

Of course, the Civil War began in 1861 and ended in 1865. There’s no consistent US data from that era, but a random search of census records pulls up handfuls of Bonnies from the early 1800s. Some appear earlier still.

For his 1600 play Much Ado About Nothing, Shakespeare penned a song titled “Sigh No More,” including the instruction to “be you blithe and bonny.”

So pretty, carefree Bonnie has been around for ages, not necessarily as a given name. But it was certainly a given name well before the problematic reference in Gone With the Wind.

HOW ‘BOUT ALL THOSE GIRLS NAMED SCARLETT?

But I’m not sure ANY of this matters.

Because here’s the thing: we keep naming our daughters Scarlett.

Unlike Bonnie, Scarlett wasn’t on anybody’s radar as a given name prior to Gone With the Wind. Margaret Mitchell actually named the character Katie Scarlett – easy to miss in the movie, but explained in the book – after her paternal grandmother. Scarlett started out as a surname.

Plenty of people who have never read the book or watched the movie can identify the main characters at the center of Gone With the Wind. Those characters owned slaves, benefited from the slave-based economy, and fought to preserve it. Bonnie, of course, was a child – one born after the end of the Civil War, fictionally speaking.

If Scarlett remains as wearable as Juliet or any other romantic heroine, then Bonnie?

All of this makes me say that Bonnie is just fine.

At the same time, I want to tread lightly. Just because I can’t see it doesn’t mean it isn’t so.

Except … if a reference this minor can torpedo a name? I think that’s really an issue. Because most names have been worn by good and bad – and mostly just downright ordinary – people over many decades and even centuries. Measuring names against that yardstick – no bad people, ever – would be exhausting. And probably impossible.

Readers, am I missing anything? Would you name a daughter Bonnie? Or, more specifically, would you refrain from using the name Bonnie because of the Gone With the Wind connection?