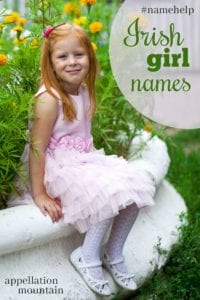 We are having baby girl number three in October and have nooooo names!

We love Irish baby names given that our last name is D0n0ghue. Our two girls now are named Nessa and Rowan.

I really love the surname/gender neutral vibe. Maeve would be an option, but we have a cousin already named that.

Congratulations on your new daughter! I’m one of three girls, and consider myself so lucky to have sisters.

Nessa and Rowan are great together, and Maeve would go so well. At first, I thought this would be the easiest list ever to write because, well – so many Irish names appeal.

But I think there are two possible challenges.

First, Nessa is clearly and unambiguously feminine. Rowan is truly unisex, a name used in nearly equal numbers for boys and girls. It sounds like you may prefer another name like Rowan – tailored and possibly unisex – but not so much so that it leaves Nessa feeling like the odd one out.

Am I overthinking it? I guess that’s what we do here!

Bree – Bree feels breezy and casual, but it claims impeccably Irish roots. It comes from brígh – meaning power. Like Rowan, it’s tailored, but like Nessa, we’re used to hearing it use for girls. It could also be short for Brianna, Briony, Bridget, or lots of other Bri- names.

Finley – Like Rowan, Finley is used in similar numbers for boys and girls alike. It’s a little less common than Top 100 – but still very spirited – Riley.

Neve – You mentioned not being able to use Maeve, so I immediately thought of Neve. The original form is Niamh, which might be challenging in American English – though not insurmountably so. One thing that gives me pause: I rhyme Neve with Dev, thanks to actress Neve Campbell. But many stay it like Eve, which is far more faithful to the long ‘e’ sound of Niamh. So that’s either a recipe for frustration and confusion, or an opportunity to use the pronunciation you prefer.

Piper – Strictly speaking, Piper isn’t Irish. But doesn’t it feel Irish-ish? In “Danny Boy,” the pipes are calling. And what’s more Irish than bagpipes? So, I wonder if this one appeals? I think it hits the tailored and unisex mark well, while still pairing nicely with Nessa and Rowan.

Teagan – This surname name comes from the given name Tadhg, which means poet. Maybe it’s generations of girls named Megan and Reagan that make me see Teagan as effortlessly feminine, or perhaps it’s just that we’re using it for girls in bigger numbers. Unlike Megan + Reagan, Teagan is pronounced with a long ‘e’ sound, which feels vibrant and upbeat.

Tierney – If you know your old Hollywood, this name might make you think of glamorous, Oscar-nominated Golden Age star Gene Tierney. But the name feels very twenty-first century, an Irish surname with history aplenty.

Quinn – Quinn shares the simple, straightforward sound of Maeve, and the surname style of Rowan. It’s used in bigger numbers for girls than boys, which could be a bonus here.

Vivian – Strictly speaking, Vivian hasn’t been unisex in the US for a few generations. (It last made the boys’ Top 1000 in the 1930s.) Today it reads as a vintage charmer for a girl. It comes from the Latin vivus – alive, but picks up some Irish sensibility via Béibin, a name famous throughout Irish legend. It’s often Anglicized as Bevin, but Vivian is another go-to equivalent.

Overall, I’m most drawn to Piper. I think it balances all of your needs and wants effortlessly, and sounds like a sister for both Nessa and Rowan.

But let’s open it up to the community, because I know they’ll have some brilliant suggestions.

Readers, what would you name a sister for Nessa and Rowan?