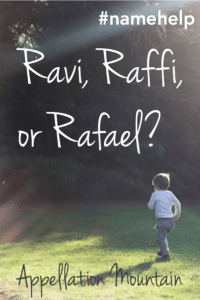 I wonder if you might have any insight on the name Ravi. Both my husband and I love it, but I am a little hesitant because we don’t want to be disrespectful to another culture. We love that it means sun. We have one daughter named Marlo Moon, and we like how they sound together. Marlo Moon and Ravi Fox.

This would be a very hard name to let go, since it just sounds like it is meant to be our son’s name. It is important to us to have a name meaning “sun” to honor a loved one named Sol. (Using Sol is not an option.)

We don’t mind raising a few eyebrows (we are used to that with Moon), so my biggest concern would be making sure we are respectful. Indian friends have told me that they don’t see it as a problem, but I want to be sure.

Our other option is Raffi. Does Raffi seem more universal? And if we do choose Raffi, should we use Rafael as his official name?

This is a tough one! On the one hand, I love the sound of Ravi Fox, and the subtle link between your children’s names is perfection. Because a name meaning sun carries such significance for you and your family, it’s even better.

And yet, it is difficult to make the case that Ravi is anything other than Indian in origin. My first thought was musician Ravi Shankar. I think he’s pretty well known in the US.

I looked for other names that start with similar sounds. Often shorter names can feel pan-global because similar names appear across languages and cultures.

So Ravi is almost exclusively Indian, and yet, the sound can occur in many languages and across cultures. This doesn’t feel like, say, choosing a Native American name for a child of-non Native American descent.

Americans do tend to use names with Sanskrit origins. Often that’s thanks to other cultural associations with the names, but not always. I’ve met people named Aisha, Bodhi, and Lila, without obvious ties to India, and yet the names seem to be accepted without a raised eyebrow.

Another point to consider: scholars believe that hundreds of languages – including English and Hindi – trace their roots to something called Proto-Indo-European, or PIE. Even though it evolved thousands of years BCE, it still explains similarity between words in languages that otherwise seem unrelated. That well of shared language could  explain why a similar name occurs in, say, Dutch and Hindi. (Though often names like Anika and Viveka appear to have independent roots – and it may be mere coincidence when the identical name appears across cultures.)

Still, I think you’d be just on the right side of culturally appropriate with Ravi. There are other possible origins for Rav- names, and you could arrive at it without

And yet, I still hesitate. When you name far outside of your culture, it is always possible that it might be perceived as disrespectful. If you were re-naming yourself, you could evaluate those risks. But since you’re naming your child, it seems far more difficult.

I also think it might be problematic to have a name that mismatches others’ assumptions about me. Priya is a gorgeous name, but if I were named Priya? I feel like it would be uncomfortable to have to explain – again and again – that I’m not Indian, wasn’t born in India, and have never been to India.

This brings us to Raffi.

Raffi crosses borders effortlessly. Rafi appears in Arabic, and nearly any European language has some form of Raphael/Rafael, which makes Raffi seem reasonable.

Though I’m also tempted by the idea of naming your son Rafael, and calling him Ravi. That’s my favorite choice. It preserves your tie to the sun imagery. But it also replaces a name strongly associated with one culture with a far more pan-global choice.

I’m sure you’ve already considered these, but other names associated with the sun include Samson, Sorin, and Helio – and I’m sure I’ve forgotten a few!

Let’s have a poll.

I know the community will have some good feedback on this topic. Readers are there other sun names to consider? Do you think Ravi wears well on a child without Indian heritage? And do you think Rafael, nickname Ravi, works?