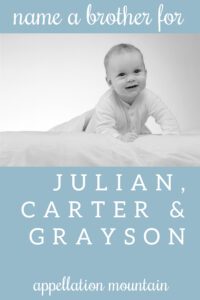 I’m one of those moms who always thought naming triplet girls would be fun, but really never thought about boys’ names. But now I’m the mom of three, soon to be four, boys! I love it, but I wish I’d spent more time dreaming up good names for my future sons!

The M middles names were a coincidence, as Marshall and Matthew are family names, but then we decided Grayson needed one, too! It’s not really after me, but I kind of like that they share my initial.

We like names that don’t feel made-up, but aren’t old-fashioned, either. Julian was kind of a stretch for my husband, and Carter was mainly his choice. We compromised on Grayson.

There’s really nothing left on our list that we both feel excited about. We’re meh on Nolan and Cameron, he can’t stand Ezra, and I’m not into Axel.

One thing we agree on is that we’d like to use the middle name Miles.

If it helps, my favorite girls’ names are Elodie and Luna. (And Juliette, but that’s how I got Julian, so it’s out now. Still love it, though!)

Can you help us find some new ideas?

Why is that girls’ names often seem easier? I have some theories, but maybe it’s most helpful to say that you’re not alone. If our second child had been a boy, I don’t know what we would have named him, much less four boys! You’ve done a great job!

So Julian, Carter, and Grayson.

Maybe we need to split the difference, finding slightly different names that aren’t quite that different from your older boys’ names.

A BROTHER FOR JULIAN, CARTER, and GRAYSON

Bennett has the -ett ending of Juliette, and the rock solid boy name Ben built-in, too.

It’s another surname-style choice, again with the distinctive -ett ending. This one edges maybe a little closer to Ezra.

If Ezra is out, would Jonah work? The “Joe” part often makes this name feel more accessible and conventionally masculine than some -a enders for boys.

Take Axel’s sound, wrap it up in something a little more conventional, and you’ll arrive at Maxwell. On the downside, it might get shortened to Max, which seems less like your style. But then there’s the initial to consider, which brings us to …

You both agree on Miles, right? Could Miles be your son’s first name? It sounds great with Julian, Carter, and Grayson. And while another M middle name might be a lot, it could work. Miles Maximilian, Miles Monroe, Miles Mackenzie, Miles McCoy.

An Irish surname associated with the rowan tree, this has become a modern favorite – just like your other boys’ names.

Miles made me think of Milo, but maybe Theo is the better choice? Like Julian, it’s an old school name with a modern sensibility. And while most Theos are actually Theodores, I think the shorter version sounds better with your boys’ names.

Wesley is a shape-shifter of a name, the kind of choice that suits a librarian or a cowboy equally well. I like it with your older boys’ names, but it’s also nicely distinctive at the same time.

Overall, I’m tempted to push you to seriously consider Miles.

Readers, what would you suggest as a brother for Julian, Carter, and Grayson?