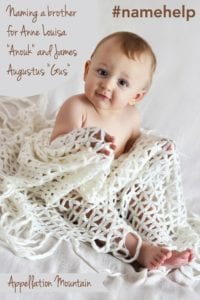 We are expecting a new arrival in a few months and could use some #namehelp.

This will be our third child, and we don’t plan to learn the gender before birth. Our daughter is Anne Louisa nicknamed Anouk. Our son is James Augustus nicknamed Gus.

We have a girl name picked out: Elizabeth/Eliza Dare, combining a family name and place name that is special to us, but could use help thinking of boy names. Boy names are hard for us. We literally chose our son’s name off of the family tree at the last second.

For the next we would like something that would fit with the first names we’ve got going on (Georgian British royalty themed?) and also with the nickname (unexpected, vaguely Euro?) my husband likes literally no names except John and I like more creative and unusual choices.

The name that I like a lot is Alexander. My husband does not like the Alex based nicknames as we have a female family member who is called Alex. I was thinking maybe Alexander called Sasha? The other name I like is Beau but I have no idea what to use as a first name besides Beauregard which doesn’t really wet our whistles.

Bonus points: we have a beloved family member who passed away we’d like to honor named Gary, so any way to work that in would be appreciated!

It’s funny the things you stress over! There’s so many other things to worry about in pregnancy. Nonetheless this is on our minds and we would appreciate input. Love your blog!

I love the classic name/unconventional nickname route. It gives your children the best of both worlds – a traditional, buttoned-down formal name, but also one that stands out and feels uniquely their own.

Possibilities abound, but I think you’ll need to decide a few things. Ideally, you’ll like both the formal name and nickname equally well. If that’s not the case, which one would you prioritize? And far will you stretch before you feel like the nickname and formal name are disconnected?

I love your short-first, longer-middle pattern. It’s another way to make traditional names feel surprising. (Anne Louisa is gorgeous and unexpected, but somehow Louisa Anne feels lovely, but a little more ordinary.) It seems like John could function as James does with your second child’s name – a rock-solid anchor for a more daring middle and every-day use nickname.

Let’s jump into the names:

Abraham, called Bram – Bram has been in the Netherlands for years, and I think American parents are overlooking a real gem. John Abraham, nickname Bram, seems like a great brother name for Gus. (And yes, it’s Georgian! British Baby Names includes the name on this list.)

Alexander, called Sasha or Dex – I love Alexander nicknamed Sasha, but I wonder if you’d consider Dex? It feels like such a nature match for Gus. In fact, I love the sound of John Alexander, nickname Dex, as brother for James Augustus, called Gus. I’ve written about unexpected Alexander nicknames before. Another one that stands out to me is Xan. I find myself hesitating over Sasha. To me, Sasha sounds very much like Anouk’s sister and much less like a brother for Gus. As a stand-alone name, Sasha was given to 581 girls and 25 boys in the US last year. I do think a boy can be named – or nicknamed – Sasha, but I feel like it’s a style mismatch with Gus. (Readers, if you disagree, I’d love to be wrong on this one!)

Edgar – You mentioned Gary. It comes from gar – spear, and the element in found in dozens and dozens of names, sometimes transformed beyond recognition. I love the idea of John Edgar because it could lead to the nickname Jed. (John EDgar – get it?) But Jed feels miles away from British-Georgian, so maybe that’s a non-starter. If you do like Jed, John Edward works as well, but drops the link to Gary.

George – What do you think of name like George Gary? Jory serves as the Cornish form of George, and would make a great nickname. I understand Geordie carries some baggage in the UK – it refers to someone from a particular region, and reality TV series Geordie Shore is the British equivalent of Jersey Shore. But in the US, Geordie would be an unexpected, but easily understood, nickname for George.

Jonathan – Does your husband like the idea of Jonathan? You might choose something like Jonathan Gary or even Jonathan Geir. (Geir comes from the Scandinavian form of the name.) The obvious nickname for Jonathan is Jon or even Jack, but you could also use Nat, Nate, Jono, or go even more creative. Though I love Anouk, Gus, and Nate – if you don’t mind that a generation of boys called Nathan and Nathaniel have made Nate more familiar.

Oscar – Plenty of possible sources led to the name Oscar, but one of them includes that element gar – spear – again. I think John Oscar, called Joss, seems like almost the right vibe. Anouk, Gus, and Joss sound like siblings to me.

Raphael, called Rafe – When I think of European boys’ names, Raphael always comes to mind. It’s not British-Georgian, but it does pair well with Anouk and Gus. John Raphael makes a dashing combination.

Robert, called Bo or Beau – Years ago, I worked with a Robert-called-Bo. He was Robert III, so the need for an unexpected nickname seemed obvious. But this one works for anyone. Though is John Robert too much traditional name? There’s also John Abbot, nickname Bo, or Robert Gary, Robert Geir, or Robert Gervais or Robert Jarvis – again, Gervais and Jarvis come from the same roots as Gary.

I could go on – and on! Frederick fits the same era as the other names you like, but always feels tougher to nickname. (Though Freddie is darling.) William and Henry also come from the right era, but feel like more general traditional boy names. Others, like Ernest and Alfred might be worth consideration; there’s also Louis, but it would duplicate your daughter’s middle.

John Leonard, nicknamed Leo, also seems like a great option – except I wonder if Leo feels too popular for you?

Now, a word on Gary: it’s very possible to reinvent Gary in dozens of ways, from modern picks like Garrett to old-school ones like Edgar. But I like the sound of Gary as a middle. It feels more like a surname in the middle spot: Michael Riley Smith, Michael Brady Smith, Michael Gary Smith. So I would consider using it, unchanged, as a middle. Though I think the coolest re-imagining of the name is the Scandinavian Geir.

If you don’t mind a combination that feels very traditional, John Robert/Robert Gary called Bo or Beau is my first choice. It gives you a favorite nickname and your husband a favorite first or the chance to use an honor name.

John Alexander, with a creative nickname, or Alexander Geir also appeals to my ear.

Though my personal favorite is probably John Abraham. I think Bram makes a great sibling name for Anouk and Gus.

Okay, readers, this challenge needs your collective wisdom! What would you name a brother for Anne Louisa “Anouk” and James Augustus “Gus”?