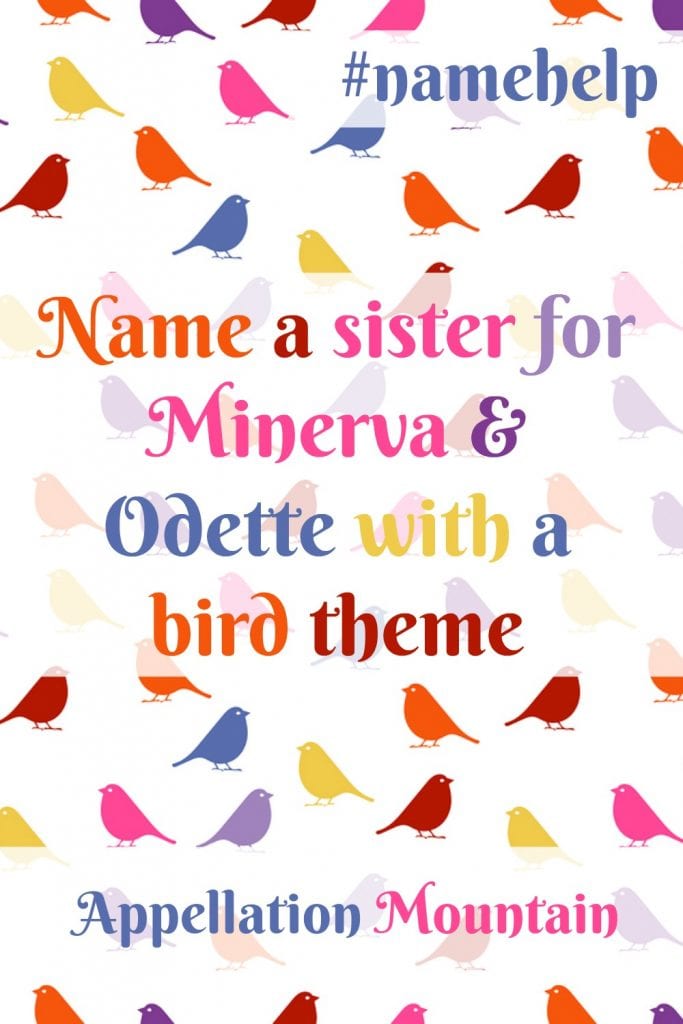 We inadvertently named our two children names that have loose connections to birds.

Minerva is the goddess of wisdom, often represented by an owl. Odette is the white swan in Swan Lake.

I’m expecting our third child. If it’s a boy there is a family name already on tap. If it’s a girl I’d like to continue with bird names. The only name I’ve found that I like is Meadowlark. I first heard of it when the basketball player died. (Note from Abby: what an amazing! name. Here’s a little more about the basketball player.) My husband thinks of it as a boy name and doesn’t really like it. He also thinks it’s too clunky. Besides it is a bird and not bird-related like the other names.

How do I even look up names that are connected to birds but not birds themselves? Tall order I know.
Thank you in advance.

What a fun accidental theme! And you’ve chosen such great names for your daughters.

This one proved tough to research. And yet, all you need is a plausible connection to a bird, so that’s much more flexible than trying to choose an actual bird name.

So we need a name related to a bird, and it also has to:

I’ll start with my best suggestions, but I know readers will have some great ideas, too.

Adelie – Names like Amelie and Elodie feel vaguely French but easily accessible in English. Adelie gives me pause because it’s easily misheard as Natalie. And yet it’s a gorgeous name! The Adelie penguin lives on the Antarctic coast. They’re named for Adelie Dumont d’Urville, wife of French explorer Jacques Dumont d’Urville, who first encountered the Adelie penguins. One other concern: Adelie and Odette share similar sounds.

Lina – I searched for books about birds, and stumbled on a 1955 Newberry Medal winner called The Wheel on the School. I’ve never read it, but there’s something intriguing about the plot. A group of children work to bring storks back to their village. Too obscure? Maybe, but Minerva, Odette and Lina match nicely. One other thought: Carolina, as in the Carolina Wren. Except that feels a little too literal!

Luscinia – Pliny the Elder used the word luscinia to refer to nightingales and their cousins way back in the first century AD. It remains part of the scientific name for nightingales to this day. No one is using Luscinia as a given name, and yet, it sounds like it should be one, right? It would shorten nicely to Lucy and Lou, and could fit right in with Olivia and Sophia and all of those ends with -ia names for girls.

Paloma – In Spanish, Paloma means dove. That tiptoes close to a literal bird name, something you’d like to avoid. And yet, it doesn’t feel like a literal bird name – unless your family speaks Spanish. It sounds like a sister name for Minerva and Odette. Plus, doves stands up well to swans and owls in terms of symbolism. Wisdom, grace, and peace.

Pavonine – Feline refers to cats, canine to dogs, and pavonine to peacocks. Like Luscinia, no one is using Pavonine as a given name. But there’s potential.

Philomela – There’s a gory story of things gone very wrong behind this pretty name. In Greek myth, Philomela suffers terribly, until the gods take pity and turn her into a nightingale.

Sephora – Visit any mall in America, and there’s almost certainly a Sephora selling make-up. Turns out that the name comes from the Hebrew Tzipporah – bird. No specific bird, just bird. That’s not exactly what you had in mind, which is okay, because I’m not sure if Sephora would wear well on a child today.

Sibyl – Do famous birds factor into your thinking? In Bell, Book, and Candle, Mrs. De Passe’s parrot answered to Sibyl. Again, this probably feels too obscure.

Overall, I think Paloma makes the strongest choice, with Luscinia and Adelie not far behind.

One last thought: I combed through lists of famous ornithologists, like this one at Ranker. But nothing really stood out. Any scientists out there? Or science educators? I feel like there might be something I’ve overlooked!

Let’s throw this open to everyone, because, readers, I know you’ll come up with some brilliant ideas. What are your favorite avian-inspired appellations?