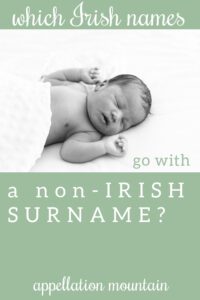 I’m Erin Murphy. (Go ahead and share my last name. It’s pretty much like being named John Smith.) As you probably can guess, I’m Irish – yes, on both sides. Growing up, I studied Irish dance and studied abroad in Dublin during college.

Then I came home, moved to Texas, and fell in love with my handsome husband, a second-generation Mexican American who is not into corned beef but likes my dance moves. His first name is a little less common, but his last name is also like the Smith of Mexico. He speaks some Spanish, but isn’t fluent, and finds it frustrating when people assume he is.

We just found out we’re expecting our first baby next year, and I’m worried we have a problem. All the names I could ever imagine using are Irish. Or maybe Irish American, because I’m not really thinking about Fiadh or Tadgh. My list is Ronan, Killian/Cillian, Finn, Callum, maybe Rory for boys. Maeve is my all-time favorite for a girl, and I also like Neve/Niamh, Ciara, and Fia.

My husband is on board with Maeve and likes some of the boy names, too.

On the one hand, I love that their full name would represent all of their grandparents’ cultures.

Also, I can see that it does solve that problem of signalling that our child won’t be fluent in Spanish. Sofia Enriquez sounds bilingual, but Chloe Enriquez not really, right?

But I feel like maybe it’s a little weird? To choose a name that is kind of like a poster announcing our backgrounds?

My husband says we should just go ahead, and it really doesn’t matter. But it feels a little mismatched to me.

We are also thinking about using Murphy as the middle name, which would make the name Irish/Irish/Spanish … if that matters.

I could really use some outside perspective on this!

Here’s the thing: unless you go the very most traditional route, and you’re Mr. and Mrs. Smith, surname decisions can feel a little challenging for every family. After all, there’s no one right answer.

Still, it sounds like you’ve settled on using his surname, which is something in the Hernandez/Garcia/Martinez/Lopez camp, right?

That seems to leave you with only one question: how Irish should your kids’ first names be?

Plenty of Irish names are favorites with non-Irish families. The world is filled with kids named Liam Rodriguez … and Aiden Chen. Just like American parents without any specific Irish heritage have embraced Ryan and Molly, so have families from other countries and cultures.

Lots of traditional names cross multiple languages beautifully. Okay, maybe not Tadhg. But Sebastian and Daniel are favorites in English and Spanish, and both familiar in Ireland. The same is true for names like Nora and Emma. If your only goal was to find a name that crossed cultures, the list would be long.

But that’s not it at all, right? In fact, it sounds like your Irish identity is something that could easily be lost in your child’s name – or at least hidden in the middle spot, while your husband’s surname is going to be carried on regardless.

Given how very popular Irish names continue to be in the US, chances are your child won’t feel like the odd-one-out.

So what does this mean for choosing a name?

All of your favorites – really! – are in.

If this baby is a girl, Maeve sounds like the perfect choice. Maeve Murphy LastName is a great mix of spirited Irish energy with just enough tradition thrown in. And Maeve feels brief and complete – it could easily balance out a longer last name.

Maybe that’s why I’m most drawn to Finn for your son. It’s mainstream enough that I’ve met Finns who aren’t at all Irish. (Plus, there’s Finn from Star Wars, which makes the name not only international, but intergalactic, too.) Finn Murphy LastName has tons of appeal!

While your hesitation is completely understandable, I think it makes sense to embrace both of your heritages in a single name. The alternative, after all, is to choose more conventionally American first names. And while that would be completely fine, if that’s what you wanted, it’s … not.

Don’t talk yourself out of the names you love.

You’ve got a great list and your husband is on board. Your child’s name will represent your family’s combined heritage with style and grace. That’s a win!

Readers, over to you – have you blended cultures when naming your children? How have you handled it?