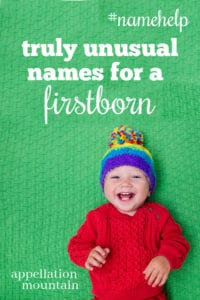 My husband and I are expecting our first in February, and do not have much in the way of names. We will not be finding out boy/girl until baby is born. Ideally, we’ll have three first/middle combinations ready to choose from when the baby arrives.

Two families names we’re considering are Lillian Lucinda and Andria Nicole, but I don’t really like either name. (Lucinda appeals as a middle name.)

For girls, we both like Elliot Eirlys. Eirlys means snowdrop, and that’s the flower of my birth month and also was the shape of the brooch that my husband wore on the day of our wedding. I also like Ireley with Elliot, as that’s how I’ve pronounced Eirlys in my head, even though it’s not “correct”.

The other pairing that is a contender is Edwin Lucinda. Edwin was the name of my grandma’s father. Edwin makes me think of “medieval princess” names like Genevieve, Gwendolyn, etc. but feels more wearable. My husband doesn’t love Edwin, but he likes Edwin Lucinda and the idea of calling our potential little girl Winnie.

Lastly for girls, I really like the middle name Colette, from the family name Nicole and my middle name, Annette.

We’ve talked about boy names, but nothing feels quite right. We both like Sullivan, but I have a hard time imagining actually using it. We also both like Floyd, and I like Theo.

Our biggest fear is baby having a common name and having to go by first name + first initial of last name. We don’t want Biblical names.

This feels like such a huge responsibility, and I think we’re both feeling the pressure. Any help or thoughtful suggestions would be much appreciated.

Congratulations on your first! It’s tough to narrow down a list of seemingly endless possibilities to just a single first-middle combination, isn’t it?

Let’s start with what you want: an unusual name that isn’t Biblical in origin and, preferably, has some personal meaning, too.

Because Elliot is a little bit different. It’s in the Top 200 for boys, spelled with one ‘t’ and two. For girls, it’s between the 500s and 600s, depending on spelling. That’s different, but far from unknown. Everyone will hear it and (probably) understand it immediately. You’ll meet other Elliot(t)s, both boys and girls. There may even be one in your child’s class. But it’s not likely to be a name she shares with lots of kids her age.

Edwin, on the other-hand, is jaw-droppingly, wait-what level different. It’s falling out of favor for boys, and it’s virtually unused for girls. A boy named Edwin would stand out. A girl named Edwin? I think that’s so different as to be potentially burdensome.

On some level, that’s a crazy response, of course. Girls are named Eden and Rowan all the time. Winnie is a perfectly reasonable nickname for a daughter, a sassy, vintage name that sounds downright sweet.

But our perceptions of names are based largely on past usage and sound. It’s easy to hear Elliot as a girl’s name because of Ella and Ellie and Juliet, too. Plus, we’re hearing – at least occasionally – for girls. Edwin seems like a stretch, a name we instantly recognize as masculine, and have a hard time recasting as feminine.

So my vote goes to Elliot Eirlys, Elliot Lucinda, or maybe Elliot Andria.

Elowen – It’s a Cornish tree name that would shorten to Ellie or Winnie – even if the spelling isn’t exactly right. Very rare in the US, Elowen reminds me of Edwin, but it’s less clearly gendered.

Lucienne – Or even Lucien or Lucian. Lucienne is the French feminine form, but I wouldn’t be shocked to meet a female Lucien. It’s tailored and unexpected, a name that fails to make the current US Top 1000. (Lucian is quite rare, too.) We so many girls with Lucy names that they all feel accessible.

Winter – If you love Winnie for a girl, and have a tie to the season, then maybe Winter-called-Winnie is just different enough? I think Winter Colette works nicely.

Now, on to the boys. Theo strikes me as the kind of name that might frustrate you. Theodore ranks in the current US Top 100, and is gaining steadily. The overwhelming majority of those boys probably answer to Theo, at least some of the time.

Instead, I wonder if you’d consider Edwin for a son? It’s a non-Biblical name that you both like, and one that others will recognize without it being at all common. Edwin Eirlys works well for a son.

Other ideas, that fall somewhere between the quirky Floyd and the familiar Theo:

Bram – Big in the Netherlands, Bram is a Dutch nickname for Abraham.

Flynn – If Sullivan isn’t quite right, how about Flynn? It’s another Irish surname with an upbeat feel, but it’s even less familiar than Sullivan.

Thayer – I wonder if another Th- name might appeal, instead of Theo? There’s Thatcher and Thaddeus and Thorpe, but I think Thayer hits exactly the right note.

Still, my top suggestion is Edwin Cole, borrowing the second syllable from your sister Nicole’s name for your son’s middle.

Readers, I can’t wait to hear your suggestions for this one: what unusual names come to mind for Devin’s firstborn?