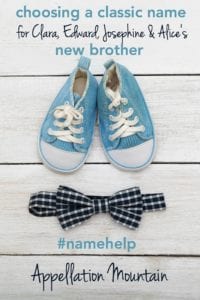 We are back here again with number five on the way, a little boy. We are having a tough time coming up with a name for him. We need to complete the sibset of Clara, Edward, Josephine, Alice, and their baby brother….?

How exciting to be expecting another boy!

I wonder if the world is catching up to you? We all consider Clara, Alice, and Josephine classic, but once I’d have called them not too common. Now we hear them more and more. Happily, classic names wear beautifully whether they’re in the Top 100 or very rare. But it strikes me that many names I’m tempted to suggest might rank higher on the popularity list than you’d appreciate.

Edward remains relatively rare, though, even among classic boy names. It currently ranks #163 – perfectly respectable, and yet the name’s lowest popularity ranking ever.

That makes me think we should avoid William and James and probably even Henry and Samuel and Charles, in favor of names with every bit as much traditional style, that happen to be slightly neglected today.

Since you haven’t repeated an initial yet, I’ll try to do the same with my suggestions.

Frederick – I’m sure there have been dozens of brother combinations named Edward and Frederick over the years. Assuming you resist the impulse to call them Eddie and Freddie, the names feel perfectly matched. They’re both impeccably classic choices that aren’t heard on every playground at the moment. If Freddie doesn’t appeal as a nickname, you might consider Rick, or even Fritz.

Louis – If you pronounce Louis in the French fashion – almost like Louie – it fits right in with your older kids’ names. Otherwise, I’m wondering if Alice and Louis are too close? I’m adding it to the list anyway, though, because Louis strikes me as exactly the kind of seldom heard, but instantly recognized, name you’d like.

Patrick – Pat feels about as current as Pat Boone’s late 50s television variety show. And yet, Patrick sounds surprisingly fresh. Most Patricks in their 30s and younger seem to strongly prefer Patrick in full. And why not? The full two-syllables reminds us how very handsome this name sounds. It lives up to its meaning – noble.

Peter – Alice goes to Wonderland; Clara dances with her Nutcracker. Edward and Josephine appear in children’s books, too, though none quite so iconic. Still, I think that’s why Peter – as in Pan, and Rabbit – sounds like such a logical choice.

Robert – The most popular name on this list, Robert currently ranks #62. And yet it feels quite different on a boy today, doesn’t it? A former number one name in the US, a whole generation of men grew up Bobby and became Bob. But today Robert and nickname Rob seem like the more contemporary picks.

Simon – We sometimes overlook Simon when talking classic names, and yet it has history galore – almost as much as Michael or John. Simon sounds smart, and also slightly British. Maybe that’s because the name is much more popular in the UK than the US, or maybe because we still think of Simon in the Land of Chalk Drawings. In any case, it’s exactly the kind of overlooked gem that feels just right as a brother for Clara, Alice, Josephine, and Edward.

Theodore – Like Robert, Theodore ranks in the current US Top 100. Theodore comes in at #83, and it’s rising fast. So maybe that counts against this name. And yet, if you’re looking for a traditional name, it’s tough to top Theo.

Vincent – van Gogh makes this name artistic; Lombardi takes it in an athletic direction. Entourage reminded us that Vince is really quite handsome. It seems like one of the most easily overlooked classics, a name that fits with Alexander and William, too.

Overall, I really like the sound of Simon with your older children’s names. Like Clara and Alice, Simon is nickname-proof. And, like all of your kids’ names, it’s easy to imagine them on a small child or a grown adult.

If not Simon, Frederick appeals for many of the same reasons. And yet I hesitate because of the possible Eddie/Freddie nicknames. If that doesn’t bother you, then Frederick seems like a great option, too.

But I know the community will have more useful suggestions. So let’s open this up to the readers.

What are your favorite classic boy names, and which would you suggest as a brother for Clara, Edward, Alice, and Josephine?