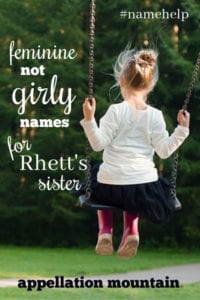 My husband and I are expecting our second child in May and just cannot decide on a name for a girl.

We named our first son Rhett and love his name for its simple but strong qualities.

We are also generally attracted to names with a touch of Southern flair without being a surname. If a boy, number 2 will be Baron.

For a girl, we’re attracted to Carris, Chesson, and Hollis but aren’t head over heels for any of them. Maren was a strong front runner for a while until a friend quickly associated Rhett and Maren with two popular country music artists of today.

My husband and I both have very unisex names that are often confused so it’s important to us that the name we choose be gender specific (hence my hesitation with Hollis and Chesson). However, we also gravitate away from traditionally “girly” names, which is why we’re not sold on Carris yet. I would love your suggestions for the perfect name for a girl!

Read on for my suggestions, and please leave your thoughtful suggestions in the comments.

How exciting to be expecting your second!

So we need the name to be clearly feminine, slightly Southern, and almost certainly not common. It should pair well with Rhett, but sound like his sister, meaning that a name like Reeve is almost certainly off the table.

Here’s the trick: in American English, the only thing that ultimately reveals gender is use. Luca is a boy’s name, but Luna belongs to the girls. Kate’s a girl, too, but Nate is a boy. And Tate? Anybody’s guess. (Though the data suggests that Tate is almost certainly a boy, too, unless it’s short for Tatum, in which case the opposite holds true.)

Names like Carris, Chesson, and Hollis don’t seem especially feminine because they’re so very rare that we can’t quite form opinions about them.

So I wonder if your part of your solution involves finding a name that’s slightly more familiar in general. After all, Rhett has ranked in the US Top 250 in recent years. (In fact, last year it climbed into the Top 200.)

I’ll mostly avoid surnames for my list, but I can’t help but note that Hollis, Chesson, and even Carris all sound very surname-y to me. So maybe you could consider a few more in that category?

Blair – Sure, it’s a surname. But Blair has plenty of history as a given name, too. While it strikes me as unisex, it’s far more common as a girls’ name – possibly because it rhymes with classic Claire.

Blythe – I thought first of Bonnie. But she’s the daughter of Scarlett and Rhett in Gone With the Wind. And then it hit me – how ’bout Blythe? It’s an archaic English word for happiness. (Shakespeare uses the phrase ‘blithe and bonnie’ in Much Ado About Nothing.) But it’s come up in conversations about Rustic Chic girl names before, so maybe it fits.

Haven – It’s a word name, but it’s not common in everyday speech. And it’s unisex in style, but in practice, used overwhelmingly for girls. I think it leans Southern, too.

Julep – Is a reference to a mint julep just too obvious? Maybe. But I think the sound is exactly right. It ultimately comes from the Persian word gulab – referring to a sweet drink. I like the sound of Julep with Rhett. It’s wildly unexpected, but nicknames to the more familiar, and perfectly tailored, Jules.

Juniper – If Julep is too out-there, might you consider Juniper? This nature name sits just outside the current US Top 300. There’s some history of Juniper as a boy’s name, but in recent years, it’s all girl. Sweet nickname Junie probably explains why.

Langley – I thought about Lane, but Lane really is more common for boys. Landry rates almost unisex. But then rare Langley came to mind. Yes, it’s a surname. But based on Hollis and Chesson, I wonder if that’s not a deal-breaker?

Lyric – One more word name: the musical Lyric strikes me as a feminine, but frills-free option. Is it Southern? Maybe not exactly. But I think it works.

Nell – Flannery came to mind first. But then I considered other Southern writers. Carson? Nope, yet another surname. Eudora? Probably too vintage. But Harper Lee was born Nelle Harper Lee. So how about Nell? Everyone has heard of it, but almost no one is using it. The Nelle spelling is another option, and I like Nella quite a bit, too.

Susan – Spare and simple, classic Susan would be huge today – if it hadn’t been big in an earlier era. Susannah screams Southern to me, but I’m sure that’s too frilly for your tastes. So might Susan make the ideal sister name for Rhett?

If none of these feel quite right, I wonder if you’d consider a double name? Hollis June or Carris Kate or Chesson Mae all sound Southern. And while they’re decidedly unusual, the second name clearly signifies gender.

But honestly? I keep coming back to Maren. It’s feminine without being frilly. It’s not a surname, though it shares that same Southern style. True, Maren Morris and Thomas Rhett – do I have that right? – are both musical references at the moment. But it’s not a guarantee that both will continue to be famous over the course of your children’s lifetimes. In fact, it’s almost certain that it won’t be the case.

And so, despite all of these suggestions, I’m circling back to Maren as my #1 choice for your second child.

Readers, what do you think? Are Maren and Rhett too close for siblings? Is there another great name for their daughter that I’ve missed?