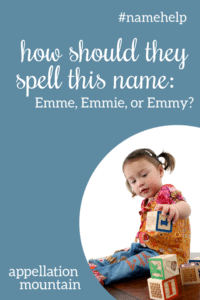 After weeks of discussion, we’ve settled on a name for our daughter, due in May: Emmeline Frances. We’re pronouncing “line” to sound like mine and sign.

But now we have another dilemma: how do we spell her nickname?

I was writing Emme. My husband spells it Emmy. And my mother-in-law thinks Emmie, because our son is Charles “Charlie” so the kids’ names would match.

I’m not sure I have a favorite – okay, I’m not wild about Emmie – but Emme and Emmy both seem reasonable. It’s just that I want there to be one, and it want to be as obvious as possible. As a child and teenager, I sometimes answered to Aly, Allie, Ali, Ally and any-other-speling-you-can-dream-up.

My husband objects to Emme because he says it will be pronounced like the letter M. But Emmy sounds a little bit Southern, maybe? It just seems less sophisticated than Emme, even though I know that might be all in my head.

So which spelling makes sense?

I’m so glad you’ve found a great name for your daughter! I know it’s frustrating to think you’re done, and then realize there’s more to decide, right?

Let’s see if we can break this down:

So no choice is bad, but perhaps the best one is whatever spelling most people favor. This is difficult, of course, because we don’t have good data on how people spell their nicknames.

But we do know that all three spellings are sometimes used as independent names, and that gives us some useful data:

Peak Emme is probably thanks to Jennifer Lopez, who named her daughter Emme Maribel back in 2008.

The actor Emmy Rossum – born Emmanuelle – might explain the rise in the ‘y’ spelling. She’s had many a starring role, including Phantom of the Opera and nine seasons on Showtime’s Shameless.

I also think of Emmylou Harris – maybe the reason you get a slightly Southern vibe from the ‘y’ spelling.

And, of course, the award for excellence in television is called an Emmy. It’s not named for some fabled early television star; instead, the statuette takes its name from a camera tube.

All of this leads me to say the ‘y’ spelling seems sensible. The numbers suggest it’s the spelling most people will think of, most of the time.

And yet, I’m not sure if there’s any way to completely avoid the Ali/Allie/Ally experience. Emmy is ascendant now, but Emmie – likely inspired by so many Sadie/Ellie spellings – is rising fast. And Emme had a good run, too.

Logic takes me to Emmy, but feel free to go your own way if it feels right for your family.

For now, let’s have a poll and see how readers feel about the choice:

Readers, do you have any advice on choosing the spelling of a nickname – or names in general?