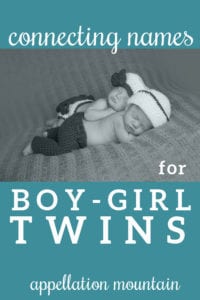 I’m expecting boy-girl twins in December – but they will probably arrive sooner – and I’d like some help finding a special connection between their names. Nothing too obvious, but something that I’ll know about.

I’m Alison, and my twin sister is Amanda. My mom also has twin brothers. My uncles both have J names. I guess the most obvious thing would be to use the same first initial for both babies, but I like the idea of something that everyone won’t notice, at least not right away, if that makes sense.

Congratulations on your new babies!

I love the idea of matching your children’s names without making it too obvious, for two reasons. First, twins do have a special bond, and it makes sense to celebrate it. But they’ll want to be their own people, too, so names that sound like a matched set aren’t ideal.

Sharing an initial is one option, but let’s look at some more possibilities, where the names are linked by meaning, style, and association.

Great mini names abound for boys and girls alike. In the most extreme example, you could name your children Io and Ty – a mere four letters for both first names combined! But I like a three-letter pair much better, because it’s more familiar – and thus, far more subtle. If not Ada and Max, maybe Ana and Eli? I like Zoe and Leo, too, because they share the same vowels, but the sounds are very different.

You might consider choosing a positive meaning, and then finding two names that share it. Felicity comes from the Latin felicitas – good luck, and evolved to mean happy in English. Asher means happy in Hebrew. Lots of names have separate, distinct roots but very similar meanings. Luke and Claire are both associated with bright, for example.

At first glance, these are both nature names – though not super-obvious ones. They’re also both shades of green. But I picked them because they’re both subtly tied to the winter holidays. Ivy, of course, brings to mind the carol “The Holly and the Ivy,” though I suppose Holly might be the more-Christmas-y of the two. And Jasper comes from the name of one of the Three Wisemen.

They share the same vowel sound, but Lucy and Jude also come from two famous Beatles songs – “Lucy in the Sky with Diamonds” and “Hey Jude.” Beatles fans would notice, of course, but that’s not likely to include your children’s peers. And since both Lucy and Jude are fairly popular by 2020 standards, I doubt most people would think about their possible origins. (Maybe a combination like Rita and Desmond would attract more attention.)

Plenty of families stick with outdoorsy nature names for their children. Meadow and River have distinct sounds, but they’re often found side-by-side. It makes for a nicely compatible pair.

Two night sky names might be perfect together. Leo is a constellation, and Stella means star. Of course, the combinations are nearly endless. Juno and Orion, Carina and Perseus, or Callisto and Oberon, maybe?

Sylvie comes from the Latin silva – forest. But that’s not exactly common knowledge, so while the connection is meaningful, it’s quite subtle. Another option: Silas shares the same roots as Sylvie. While Silas and Sylvie might be too close – there’s that shared initial again – Silas could pair with a tree name, like Laurel, Willow, or Juniper.

I’m not sure if Wren and Jonah belong in the same style neighborhood, and yet I like them together. Wren is the name of a bird, and Jonah? It means dove in Hebrew.

It’s tough to choose a favorite – and I know I’ve barely scratched the surface of possible combinations! Stella and Leo might be my favorite, assuming you don’t mind names that are a little more popular. But if you’d prefer names that are less common, I think Sylvie and Forrest make a great pair.

Readers, over to you! What are some great boy-girl twin names that connect … but not too obviously?