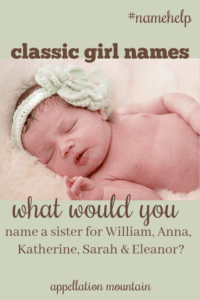 My husband and I are expecting our sixth child, and fifth daughter. We like traditional names, but after four girls, we’ve run out of names we agree on and could use some new perspective.

Our son is William Andrew, mostly called Will.

Anna Elizabeth, called Annie, Annabeth, Anniebee, and AnnaBanana at home, but mostly Anna by everyone else.

Sarah Veronica, always Sarah. Her middle name was Rose until the very last minute, when we decided we might use Rose for a future daughter.

Our last name is long, Polish, starts with a N, ends with a -ski. No one ever says it right, so we want our kids’ first names to be easy. Family names aren’t our thing, unless it’s an accident from a few generations back.

The only name that has been on our maybe list for all this time is Rose. Sarah was almost Sarah Rose; Ellie was almost Rose Eleanor.

If we’d had another boy, we’d planned to use James Henry or James Anthony. Since it’s possible we’ll see use it in the future, we probably want to avoid J names. (So Jane was never a first name option.)

We also like the idea of Elizabeth, except it’s already Anna’s middle name, and we have an Ellie. So that seems confusing.

Wait, did I just blurt that out? Let me back up.

Congratulations on your daughter! It does get tougher as you use your favorite names. But in this case, I’m wondering if you’ve ever considered Mary? It seems like such an obvious sister name for Anna, Kate, Sarah, and Ellie. And you could easily use Rose as her middle name. There’s something very sweet and timeless about Mary Rose, whether you use it as a double name sometimes, like Annabeth, or not.

Except you must have considered Mary already, right? Or Maria or Marie? So I’m going to (try very hard to) move on. Would you consider:

Claire/Clare – Clara almost rhymes with Sarah, so that’s out, but how about classic Claire? The French spelling, with the ‘i’ added – is far more popular in the US today, but you might like the sparer Clare instead. (And I know women and girls with both spellings.)

Louisa/Louise – I feel like Louise is more your style, a tailored name in the key of Katherine and Eleanor. And nicknames? Oh my, do these two names have nicknames! Lou, Lulu, Lucy, Lula …

Lucy – Of course, Lucy isn’t a nickname at all. It’s the typical English form of Lucia just as Mary is to Maria. Or Lucy could be short for Lucille, too, which seems like it might sound right at home with your older girls’ names.

Margaret – I’m having the same reaction to Margaret than I have to Mary. Surely you’ve talked about traditional Margaret already, right? With forms and nicknames galore, it’s easy to imagine Maggie or Meg or Margo fitting in with your family.

Ruth – Ruth carries the same simple elegance as Rose, but it feels a little different, too. And it’s slightly distinctive, I think, a name that’s just different enough.

Teresa/Theresa/Therese – I know a bunch of girls who answer to Tess – or Tessa or Tessie – but they’re actually Theresa, Therese, or Teresa. So it seems like a logical name to suggest.

Okay, I know our readers will have opinions, so I’ll end with this: I love the idea of something like Mary Lucille or Margaret Ruth – two traditional names, but one a little more evergreen, and the other slightly less so.