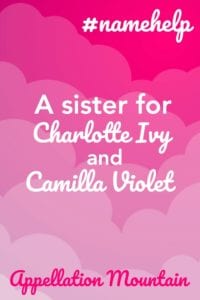 Our third baby girl is due just four short weeks and we are having a hard time picking a name. It’s easy to find the one girl name you love but coming up with three starts to get tricky.

Currently we have two daughters, Charlotte Ivy and Camilla Violet (no nicknames, just their pretty first names are always used.)

You and your readers previously helped get us to the beautiful Camilla Violet which we loved and went with. Now I’m trying to find another name that goes well with Charlotte and Camilla, and a name that we love just as much. We like vintage or more classic names, nothing unisex.

Some other names we’ve considered but ruled out are Victoria, Annabel, Lydia, Elsa, Audrey, Eleanor.

Currently we have the following names in a bit of short list:

Chloe – We had this on our list last time, it’s nice but not sure if three “C” names are overkill.  We may or may not have mother child and I think having three with the same letter and then a possible fourth with a different letter would seem odd.

Meredith – This is our current top contender.  One concern is that it isn’t feminine enough compared to Charlotte and Camilla? Is it a bit too dated and heavy for a little girls name?

Olivia – Always a classic, I do like Olivia but it’s popularity makes it a bit boring for me.

Elsie – A twist on Elsa (and trying to break the initial thought of “Frozen”) Elsie is nice but wonder if it is too nicknamey.

Any feedback or suggestions you have would be ever appreciated. I’m starting to feel a little panicked again and that we are just going to have to pick any name regardless if it’s “the” name or not …

You’ve brought up some really good points in your letter. If you imagine that more children are in your future, it’s a good idea to sidestep another C name. It all comes down to personal preference, of course, but if I had two children with a shared initial, and then welcomed a third, well … I would feel committed. It’s not a rule, but it can feel like one. So best to avoid it now.

I really like Elsie, but it does feel a bit nickname-y, especially if your older daughters are always Charlotte and Camilla, rather than, say, Lottie and Millie. If you used nicknames all the time already, your youngest daughter’s lack of a formal name wouldn’t be noticeable. But in this case, I suspect it may feel like something is missing – to you, and maybe eventually to her, too.

As for Olivia, it’s a lovely, gorgeous name, and it sounds like a sister for Charlotte and Camilla. But there are an awful lot of girls named Olivia, so if that feels a bit repetitive now, well … that might be better avoided.

That leaves Meredith, and honestly, I think it’s pretty near perfect. It’s traditional, but not wildly common. And it sounds like a sister for Charlotte and Camilla without repeating an initial – or any other shared sounds.

But since you have your doubts, let’s see what else we can imagine.

One last note: British readers, please chime in! Am I wrong about Meredith feeling more classic and timeless than dated? It did peak in the 1980s in the US, but was never so popular that it feels overdone. But I’m not sure about popularity – or perception! – in the UK.

Alessia – An Italian cousin to Alexis, Alessia sounds dramatic and elaborate – just like Olivia. But it’s far less common. I think it works nicely as a sister to Charlotte and Camilla. There’s also Alessandra, but the extra syllable makes me think it would be harder to wear without nicknames.

Antonia – Another A name with Italian roots, Antonia feels as classic as Charlotte, as romantic as Camilla.

Eliza – From a popularity perspective, Eliza falls somewhere between Charlotte and Camilla. While you might shorten Eliza, it’s typically used in full, which fits your preferences. It strikes me as the middle ground between Elsie and Olivia. Another option might be Elisabeth, with the German/French/Scandi spelling – but Elisabeth feels slightly more likely to be nicknamed.

Evelyn – Like Eliza, Evelyn is pretty popular. But it’s still less common than Olivia, so it might feel just different enough. It strikes me as a tailored choice in the same category as Meredith – and yet, it’s enjoying an uptick in use now, so there’s no way to argue that it’s dated.

Helena – Camilla makes me think of Helena. Americans are forever debating the preferred way to pronounce this name, but perhaps that’s not an issue for you?

Josephine – This is the first name that came to mind! Even though there are plenty of Josephine nicknames, I like it – and often hear it – used in full.

Veronica – Because Olivia and Victoria were both under consideration, I keep coming back to the letter V. Like Meredith, Veronica peaked a while back – in the 1970s. That almost puts it in mom name territory, and yet it was never so common that it feels overused.

Vivienne – If Veronica feels like a maybe, but not quite, how about Vivienne? Once again, it falls somewhere between Charlotte and Camilla in terms of popularity. It’s pretty, but tailored – which fits in nicely with your older girls’ names.

As far as middles go, would you consider Lily? I’m most drawn to Josephine Lily, and I really like Helena Lily, too. Of course, there’s a garden full of girl names to consider.

That is, of course, if I can’t talk you into Meredith. It’s a name with substance, just like Charlotte and Camilla. But it’s also a distinctive sound that isn’t overused, nor is it likely to be shortened – two qualities that you’re also after.