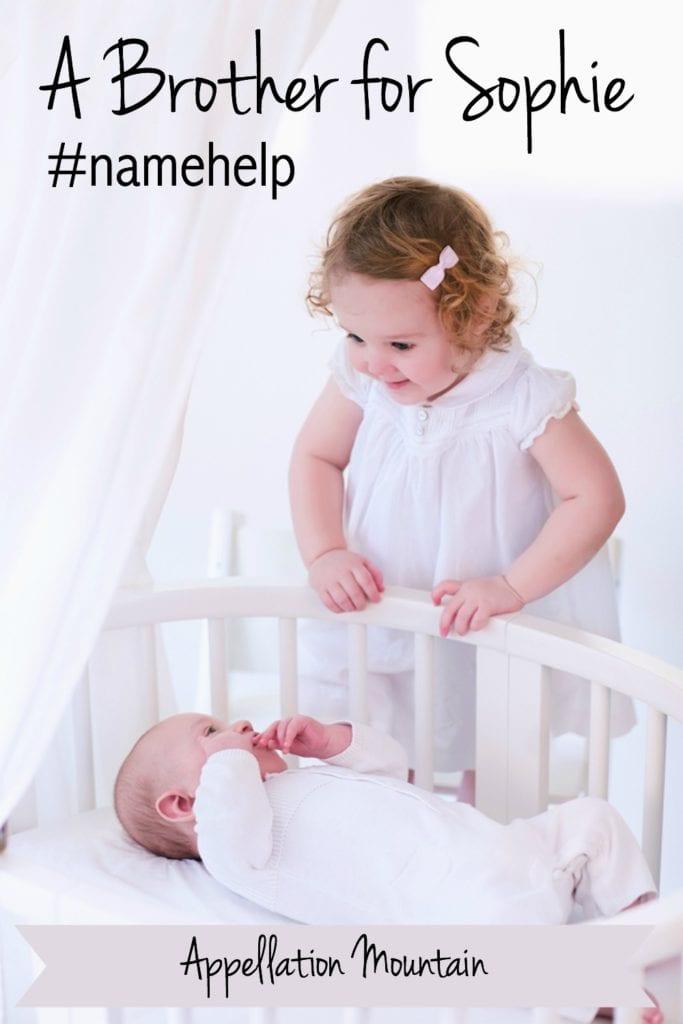 My husband and I are having a heck of a time deciding on a name for our future son.

I am a teacher, so automatically, that helps me rule out lots of names.

The one name we love, James, is my husband’s middle name. However, it was used by my close cousin, and I don’t really want to have two boys with the same name in the family because we are close.

My husband loves the name Benjamin, but I have had students named that. We can’t seem to find any common ground.

We have discussed a few other names:

But we are not finding anything we love or want to commit to, and don’t really care for any derivatives of those names.

I also have a strong aversion to any names ending in “den” or “son” because of the many popular and sometimes rhyming names of Hayden, Jaden, Ayden, Hudson, Jason, Kayson and the like.

I’m also doing my best to stay off the top 50 or so list to avoid my children being named the same thing as future students, despite that failing miserably with the name Sophie. But we still love her name regardless.

Our last name is a tough one to match up with as well. One syllable, starts with a C, rhymes with ouch.

If our first child would have been a boy, we probably still would be in the hospital trying to figure out a name.

It sounds to me like your taste in names is pretty traditional. After all, Sophie might be very popular right now, but it’s also a name with a long history of use.

And James, your top name for a boy, is about as classic as it gets.

That’s in conflict with your desire to avoid duplicating a name with a former student – or a future student, even!

That’s a tall order, because the most classic names for boys are, by definition, in heavy use over the years. It’s very likely that you’ll have a future student – or a neighbor, colleague, dentist, auto mechanic – with any name that qualifies as a true classic.

One approach might be to dig deeper for a family name, though it sounds like you’ve ruled out all of the likely options.

There are a few directions you can go:

Henry – I think Henry seems like an obvious brother name for Sophie. It’s classic, but also stylish right now. It’s not likely to be nicknamed, so it would work well with your short surname. And you could use some of your more inventive or family names as middles. (Since Sophie has two middles, how about something like Henry Alexander Orion?)

William – William is every bit as enduring as Henry or James. The downside? William is currently a Top Ten name throughout much of the English-speaking world. Heck, it’s the name of the future King of England. It’s everywhere. And yet, because fewer names repeat than ever before, I doubt you’ll feel like William is too popular. We know two Williams under the age of 12. (They don’t know each other.) One is Will; the other is always William. Both wear well.

Jonathan – John was long the absolutely most popular name for a boy everywhere. Today, the name’s influence is still felt, but it’s much rarer to meet a boy called John. Still, with a short last name, you might like something a little longer. Jonathan requires no nickname, but has plenty of options if you’re so inclined. (Jon, Jack, Nat, Nate, Jono, for starters.) Sophie and Jonathan sound lovely together.

Matthew – Matthew was long a Top Ten name, but it can’t be called trendy. There’s Downton Abbey’s Matthew Crawley, Arctic explorer Matthew Henson, Commodore Matthew Perry, plus politicians, actors, and athletes galore. Parents are often so intent on avoiding popular names that we avoid the traditional favorites like Matthew. And Sophie and Matthew sound timeless together.

Nicholas – Nicholas was big in the 1990s, but again, you’re not likely to meet a lot of young children with the name right now. Like Jonathan, there’s more than one possible nickname. (Nick, Nico, and Cole all come to mind.) Another possibility might be Colin, originally a nickname for Nicholas. Nicholas is an ancient as Alexander, far more mainstream than Nicodemus, but not as popular with children born in 2016 as you might imagine.

Peter – I keep expecting Peter to rebound, especially after so many pop culture reboots of the Peter Pan story. So far that hasn’t happened – Peter remains in style limbo, familiar but not fashionable. It could be the perfect middle-of-the-road option between James and Apollo.

Harold – I know two school-aged Harolds, and I can honestly say it wears well. Harold has history to spare, shares nicknames with the stylish and traditional Henry, and manages to be surprising and completely familiar at the same time. If you’re after something different, but not invented, this might be the direction to go. For more names in this category, see this list.

Gilbert – Sure, it might prompt questions about whether you’re a big Anne of Green Gables fan. But Gilbert has a long history of use – the Normans brought the name to England, where Saint Gilbert lived in the twelfth century. In recent decades, it’s been rare in the English-speaking world, but it is still widely recognized as a given name.

My sense is that a name like Jonathan might be your best bet, and I really like the way Matthew and Sophie sound together. But I do think you have lots and lots of options – especially if you’re willing to choose a traditional name that has been shared by many, and therefore can’t really be owned by any one.

Readers, I know there are dozens of more possibilities! What would you suggest to Shivon and her husband? I’d especially love to hear from teachers, and to know more about how you handled the but-I-have-a-student-named-that dilemma.