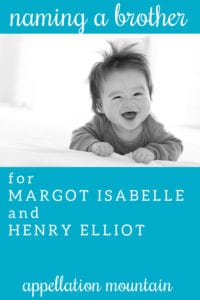 We named our daughter, Margot Isabelle, in about ten minutes right after the ultrasound tech told us it was a girl.

It took until the very last possible second to name our son, Henry Elliot.

We had about twenty girl names we could’ve used, but barely could settle on Henry.

Happily, we love both names and think they suit our children perfectly.

But now we’re expecting another son in February, and naming hasn’t gotten any easier. We want to avoid the stress of not deciding until the very last minute … if we can.

We like that our kids’ names are classic, short, not-nickname-able, and sound cute on kids but will grow with them. The short part is important because our hyphenated last name is V0lk3r-H3ss. The no nicknames part matters because I have always hated having to be Elizabeth/Lizzie. Also, my partner comes from an all-J name family (not that one), and so feels strongly that we all get our own initial. That means no (more) L, J, M, or H names. (And maybe not E, either? We’re divided on which initial is “really” mine.)

Can you help us find some names that fit our (very picky, I know) requirements?

Congrats on your new son!

It sounds like you’ve looked at every boy name already, right?

I mean … while I often say that the pool of names is nearly infinite, when you’re trying to stick with more traditional choices, the list can feel very short!

It’s also true that your children’s names are quite stylish. Classic names do trend, and both Margot and Henry are having a moment right about now. I’m guessing you might not know tons of kids that share your children’s names, but you’ve heard them on playgrounds and friends-of-friends’ families, too.

So while I’m sure you’ve seen these names before, let’s see what I’d suggest that satisfies your rules and feels like a vibrant, current, classic to go with Henry and Margot.

But maybe we can look at them with fresh eyes.

Before we get to the names … are you absolutely certain that another J name is off the table? Because Jack sounds like exactly the name you need. Then again, if lots of J names repeat, then maybe there’s already a Jack/Jackson/Jackie that rules the name out anyway.

ALEX – Alexander fails your test, because it’s nearly always shortened. But how about just Alex? It’s traditional, easy to spell, and hard to shorten further. (And, for what it’s worth, I think Alexander-called-Alex isn’t quite like Elizabeth-called-Lizzie. Because you might be Beth or Libby or Ellie, but most Alexanders do end up being Alex.)

CHARLIE – On a similar note, you might name your son Charlie-not-Charles. It’s a traditional choice – either in short or in full – for a son.

FELIX – Vintage Felix seems modern, thanks to that x ending. And the meaning is great, too – lucky.

OTIS – Maybe this isn’t quite mainstream enough, but Otis shares the OT of Margot and Elliot – so it feels like it matches in a subtle, almost secret way.

OWEN – A name with a long history of use, and a compact, but upbeat sound.

SIMON – Simon sounds smart, a scholarly name with plenty of history. It’s not quite on the upswing, in the way that Henry and Margot have been, but I think it fits that cool-classic vibe, too.

THEO – Most Theos are probably Theodores, but as with Alex, you can always skip straight to the short part. As with Leo (which I would’ve suggested, but, oh those repeating initials!), it’s bright and upbeat.

XAVIER – Xavier feels modern, but it’s been around for ages. Like Margot and Henry, it’s traditional and quite stylish. And you haven’t used the initial X yet!

It feels like lots of these names have potential. I’m drawn to the idea of Xavier Otis – I mean, his initials would be XO! Or maybe Isaac Alexander?

Readers, what would you name a brother for Margot Isabelle and Henry Elliot?