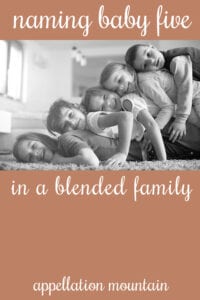 In September, my husband and I will welcome our first child together. This baby will join:

I know it sounds complicated. It can be complicated! But we’re determined to make all this crazy work.

We both have a tendency to let our partners take the lead when it comes to names, so I’m not sure either of us has a definite style.

At first, it bothered me that the kids’ names are so different, but it doesn’t really matter now. I’m not trying to come up with the one perfect name that will make them all work together, either. (It’s pretty uncommon for all four kids to be together, except for a few holidays/family events.)

This will be our only child.

Names we have discussed include:

As you can tell, we’re all over the place. Help!

And this is a challenge, but I think your attitude is exactly right. There’s not a ton of middle ground here, so why not start fresh? Choose a name you and your husband love, one that suits this moment in your life together.

Instead of adding lots of names to your list, I’m going to try to narrow things down a little.

It seems like you’ve got some overlap with Nora and Tori. If you both keep coming back to Nora, I can’t see a reason in the world to not use it.

But I also wonder if you’d like Rory? Strictly speaking, it’s an Irish boys’ name. But in the US, it’s been used steadily for girls. Golden Age Hollywood actor Errol Flynn named his daughter Rory way back in 1947. More recently, Gilmore Girls put it on parents’ radar as a unisex possibility.

I love the idea of something like Nora Sloane, or maybe Rory with a more conventionally feminine middle. Rory Genevieve, maybe, as a subtle nod to your name?

And if you’re both open to Veronica, but not sure if it’s quite right, I wonder if Vera would appeal? It’s as brief as Nora, with a handful of great meanings: faith and truth. Plus, in Albanian it means summer. Again, I like the sound of Vera Sloane.

When I see Andrew next to Crew on a list, it strikes me the perfect compromise is Drew. It’s as casual-cool and breezy as Crew, but a little closer to traditional, buttoned-up Andrew, too.

If you like Paxton, along with short names like Nash, would Max appeal at all? It’s more traditional than some of the names on your list, but not nearly as buttoned-up as, say Stephen or William.

Speaking of William, how do you feel about Liam? It is very popular, indeed – and yet the most popular names aren’t nearly as common as they used to be. It’s potentially another compromise name, one that bridges different styles nicely.

Based on your current list, I love the idea of something like Drew William, Liam Andrew, or maybe Max Stephen?

Readers, over to you – what would you suggest to Jenna to go with Ruth Margaret, Logan Jesse, Hailey Katherine, and Dylan Marie?