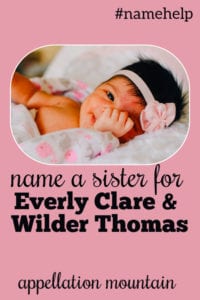 I love names, especially ones that are a little bit different. But lately it seems like every name we love ends up being really popular. It’s making it really hard to choose a name for our daughter, due early in 2020.

My husband and I have two children: Everly Clare (5) and Wilder Thomas (almost 3). Both names were really different when we chose them – nobody else was using them, nobody had even heard of them! Our parents hated them. (You say that’s a good sign, right?!)

But now there’s an Everly in Wilder’s day care class, and a friend of friends just had an Everleigh. We don’t know any other Wilders yet, but I feel like it’s all over every name discussion. Both names, really.

I guess we like modern names, and we’d rather our kids have names that are a little bit different. (I was always the only Lara, and I liked it; my husband has a common name that he shares with his dad, and he wants something different even more than I do.)

So what goes with Everly and Wilder, but won’t be the next big thing?

People who love names often have this problem. We tend to be a little bit ahead of the curve, and awfully good at knowing what’s going to be the next big thing. If our interest were music or interior design, this would be less of an issue. Maybe suddenly everyone would have painted their bedroom the same color, or our favorite band would start appear in movie soundtracks and Jeep commercials. But mostly, that’s okay. I mean … we can download new music. And re-paint.

Names are different, though. The crowd might catch on to our undiscovered gem of a name, and then our only choice? Well, we pretty much have to share.

So what’s a stylish namer to do?

You have two choices.

First, you can embrace the idea that you’ve given your children great names. I mean – you have! They split the difference between polished, preppy surnames and deeply meaningful choices. They have cool, edgy sounds and yet they seem enduring, too. And it’s worth repeating that popularity isn’t what it used to be.

Or you can go a little farther in search of a name that no one is using. I’ll help.

A word of caution: these names might feel even stranger to others than Everly and Wilder did at first. After all, it sounds like Everly and Wilder were gaining in use when you chose them. I’m going to suggest names that are far rarer for this daughter. So you may need to repeat them, spell them, and even explain them sometimes. Given what you’ve told me, that might be a little bit of a thrill.

None of these names ranks in the current US Top 1000, and I don’t see any of them tipping in this year, either. (Though that can always change.)

But based on what we know today, these are my picks for a sister for Everly and Wilder.

Adair – A surname style name with a hint of adventure, thanks to “dare” in the second syllable. I suggest it all the time, but no one takes me up on it. Lucky for you! A mere 17 girls were named Adair last year.

Brighton – Another surname-style choice with a virtue built in. Just like Everly’s enduring ever and Wilder’s untamed wild, Brighton carries a shining light of a word. 131 girls – plus 118 boys – received the name last year, but that’s still well beyond the US Top 1000.

Halston – A surname inspired by a 70s and 80s fashion design powerhouse, Halston feels familiar. And yet, just 11 girls (and 14 boys) were named Halston last year.

Hollis – Hollis feels like a surname spin on former favorite Holly, but it’s also pretty rare. 145 boys and 121 girls received the name last year, but that’s still far outside of the Top 1000.

Linden – Like Adair, I’ve been suggesting Linden for years, but it’s just not happening. Linden sounds just feminine enough – thanks to so many Lynns – but it’s tailored, too. 80 girls and 105 boys received the name last year.

Paxton – Strictly speaking, Paxton ranks in the US Top 1000 – for boys. And I suppose if you asked me, I’d expect Paxton to be a brother for Everly and Wilder. Except Pax started out as the Roman goddess of peace, which makes me feel like Paxton could be gender neutral … and meaningful, too. 1,677 boys received the name last year, but just 87 girls.

Whitaker – Whit makes me think of wisdom, though that’s not what it means – it refers to the color white. We named girls Whitney for years, but Whitaker feels fresh and unexpected today. 44 boys received the name, and fewer than five girls. (In other words, it’s not listed in the 2018 baby names data – which could mean it was given to zero girls, or as many as four.)

Winslow – Names ending in ‘o’ continue to rise for girls, whether it’s Margot or Meadow. Marlowe could be the next Everly, so if you’d like to avoid that, how about Winslow? It’s unexpected, but definitely on the right side of wearable. 47 girls and 31 boys received the name last year.

Overall, my favorite is Adair. I like the way it includes a bold sound, just like your older kids. And just as Everly might be Evie in the future, Adair could blend in as Addie, if she were so inclined. So I think they make for balanced, well-matched sibling names.

And while I can’t guarantee no one will ever discover Adair, it’s not trending … not even a little bit. Even if it tripled in use next year, you’d still probably never meet an other Adair.

Readers, what have I missed? And what would you suggest as a trend-proof sister for Everly and Wilder? 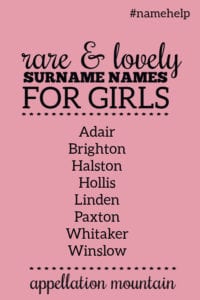