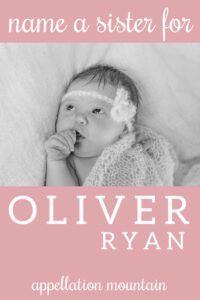 We are expecting a daughter in March, and after looking at EVERY name ever, there’s only that we both really like: Alice. Her middle name could be Margaret, Mary, or Ruth. Maybe even Mary Ruth/Maryruth? Or Louise if we don’t use it as a first name.

Our son is named Oliver Ryan. We love his name. Even though I know it’s popular, we don’t hear it as much as I thought we might.

I thought we were all set, but when I say the names together fast, I wonder if they’re too close?

Our runner-up names were:

My husband is still all in on Alice, but I don’t want to get it wrong!

It sounds like you were all set to name your daughter Alice, until you said Oliver and Alice together five times fast.

So … how close is too close?

Ultimately, it comes down to personal preference, but there are some ways to think about it.

In many ways, the names are distinct. They don’t share the same first initial, origins, meaning, or ending sound. They’re not connected by pop culture or history in an obvious/weird way. (You could never name Juliet’s brother Romeo, but I can’t think of any Oliver/Alice connections.) And the names don’t rhyme.

One factor, however, gives me pause.

Are you nickname people?

But if you routinely shorten Oliver to Ollie, would you end up with Ollie and … Allie?

You don’t have to, of course. Alice shortens to Lissy, too.

And plenty of people go through their entire lives without a nickname. They’re not mandatory, and many parents prefer to avoid them.

I bring it up because Oliver and Alice are perfect together.

Ollie and Allie? They’re a pair of animated koala bears. Cuddly and cute, but maybe too cute for actual humans.

Of course, plenty of us have too-cute-for-actual-humans nicknames for our children when they’re under five.

And your kids might independently come home from school or soccer practice or summer camp with a nickname you never planned.

It sounds like you’ve considered every name under the sun, including most of the classic possibilities that would be great with Oliver.

But I want to suggest one other category: Lou- names without the weez!

If Louise/Louisa is a family name, would another Lou name be worth considering?

Vintage and traditional, a Top 100 favorite not likely to be shortened at all.

A romance language take on Lucy, every bit as enduring as Louisa and Louise.

Okay, there’s still a weez in Eloise, but the sound is just a little bit different, so maybe it’s worth a mention? Then again, you might end up with Ollie and Ellie, so maybe this isn’t an improvement!

A vintage, French favorite with a little bit of midcentury appeal, too.

A SISTER FOR OLIVER

Overall, I’m not sure I’d put aside Alice. It’s your favorite name; it’s great with your surname; and it works with your middle name options.

But if you do still feel hesitant, I wonder if Lucy would be an option? It’s weez-free, traditional, and there’s no overlapping sound shared with Oliver.

Readers, what do you think: would you name Oliver’s sister Alice?