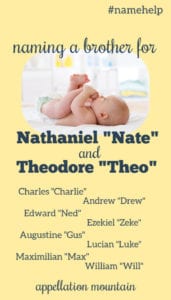 We have twin sons, Nathaniel Biagio and Theodore Severino. They go by Nate and Theo. Their middle names are from my big, Italian family. They’re not honor names, just ones we found and liked. (My great-aunt researched our family tree way before ancestry.com was a thing.)

Our last name is one-syllable: R0ss.

Now we’re expecting again. If this baby was a girl, she would’ve been Josephine Loredana, called Josie or maybe even Posy.

Instead it’s a boy, and we’re feeling stuck.

We don’t want to use Nicholas, because both Nick and Nico seem too close to their brothers’ names. Alexander is our current front-runner, but my husband’s name is Allan, and we’re not sure about the repeating Al- sounds. (I know it would probably be fine. But it still feels taken.) We like all of the Leo names, but Leo and Theo! I like Zachary, but Zack not as much. And I considered Jonathan, nn Jack, but my husband likes nicknames that are obvious. Bennett is my nephew, so Ben/Benjamin is out, too.

Can you help us find more names where we like the long and the short?!

It’s so easy to feel like we’ve set a pattern, so I feel like the first thing to say is this: it’s okay to break the rules! Sometimes The Right Name doesn’t check every box, but still works for your family. (And those box-checking names? They could be very much the wrong fit.)

In fact, a few of the names that came to mind struck me as maybe wrong, even though they’re right on paper. Dominic feels aggressively Italian if you’re planning to use another heritage name in the middle spot. But then Cameron felt a little too brisk and modern, compared to traditional Nathaniel and Theodore. And Rafael and Gabriel are both great choices – except are Rafe and Gabe just plain too close to Nate?

I narrowed my list to eight possibilities, though I definitely have a favorite or two!

Charles called Charlie – I concede that Charlie isn’t exactly short, and Charles is far from long. It’s one of those names where the informal version and the formal version are both two syllables. And the exact same number of letters. But still. I think, style-wise, that Charlie sounds like Nate and Theo’s brother, plus it has the same dressed-up/dressed-down format.

Andrew called Drew – I know repeating an initial A is a concern, but maybe less so if his everyday use name starts with a D?

Edward called Ned – I suppose your Theodore could grow up and choose to go by Ted. Which risks your sons sounding like characters from a Dr. Seuss story. But if you’re willing to chance it, Edward called Ned feels like an intriguing possibility. Or, as with Charlie, there’s Eddie, too – which can be quite charming.

Ezekiel called Zeke – Some of Alex’s appeal is the X factor. Zeke sees that X and raises you a Z, possibly an even cooler member of the alphabet.

August or Augustine called Gus – As with Andrew called Drew, a longer name for Gus probably starts with an A … but Gus sounds nothing like your husband’s name, so maybe that works out just fine.

Lucian called Luke – I suspect your husband might not be super into Lucian called Luke, if only because it changes a soft ‘c’ into a hard ‘c’ sound. There’s also Lucas called Luke. I do think it’s great with Nate and Theo, another high energy name that sounds at home on a baseball diamond or a professional setting, as good for a child as it is for a man.

Maximilian called Max – No question Maximilian is a big name. Plus, like Theodore and Nathaniel, it feels traditional and rooted, without being too common. My favorite part? Max is the obvious, immediate, go-to nickname. Maxwell is another formal-name option, and, as with Charles, I think it matches the general style of Nathaniel and Theodore, even if it’s a little short. But if you’re going for the syllables, Maximilian is an obvious choice.

William called Will – I can hear Nate, Theo, and Will together effortlessly. William is, again, on the shorter side, but I think it’s worth it to get to such a strong nickname that should please your husband with its status as an obvious, default short form.

My favorite for you is Max. (Please don’t tell me your grandmother had a schnauzer called Max!) I’d use it with Maximilian, but Maxwell could be every bit as pleasing. Like Theo and Nate, it’s a modern favorite for our sons – familiar, but not wildly overused. (Though, because there are so many formal versions of Max, it feels more common than the data might suggest.)

If not Max, I’m drawn to Charlie and Will. The formal names – especially in the case of Charles – might not feel as long as Theodore and Nathaniel, but they fit in the same general category. I especially like Charlie with your older sons’ names.

You didn’t mention a middle name for this son, but it occurs to me that you might already have a favorite. Trying out each of these with your favorite middles and surname might be the best way to choose a finalist.

Readers, what am I forgetting in the long-short boy name category?